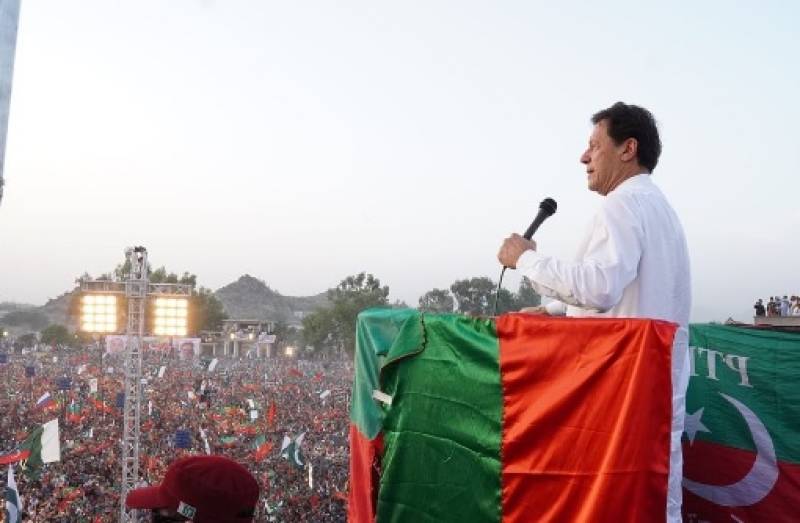 Khan, who has been flexing his political muscles since his ouster from the Prime Minister’s Office through a no-confidence vote in April, in a video message urged people of Khyber Pakhtunkhwa to reach the Wali interchange to join the "Azadi" march.

"I hope everyone will come out to get real freedom," he said.

My message for the people of KP pic.twitter.com/pplWbtgb0M

In late Tuesday night message, the former prime minister said: “I will reach D-Chowk via Kashmir road”. He urged his party workers to join the long march without fear of getting jailed.

This move aims at saving the future of our next generations, he said.

Meanwhile, Prime Minister Shehbaz Sharif led federal government has announced not to permit the PTI to conduct its long march, citing the violence happened during 2014 sit-in.

Interior Minister Rana Sanaullah, who was flanked by other members of the coalition government, announced the decision on Tuesday amid the crackdown against PTI leaders across Pakistan.

The PML-N leader addressing the news conference said the interior ministry has directed the law enforcers to deal strictly with the agitators. The administration in the federal capital has also imposed Section 144 of the Criminal Procedure Code of 1973 for two months.

PTI will not be allowed to spread chaos, violence and anarchy by besieging the country's capital in the name of so-called Long March, he said.

Rana Sanaullah said the entire PTI leadership is present in Peshawar from where it is planning to invade the federal capital by utilizing forces and resources of Khyber Pakhtunkhwa. He said violent gangs cannot be allowed to attack the federation. He warned the people, who have become hypnotized by Imran Khan's politics of hatred and divide, to come out of this illusion and stay away from these things.

As police continue to raids houses of PTI leaders and workers in different cities across Pakistan, two party stalwarts Senator Ejaz Chaudhry and Mian Mehmood ur Rasheed have been arrested.

PTI leadership claimed that hundreds of their party workers have been arrested by police in various cities in a bid to scuttle the long march.

@EjazChaudhary was arrested by over 100 policeman. He kept asking the arresting goons including 10/15 white clothed people if they had orders from @SenatePakistan Chairman orders as he is a senator. They pushed him around & was abusive with @EjazChaudhary admin @PTIofficial pic.twitter.com/RqruBjasih

A day earlier, Punjab Police conducted raids on the houses of several PTI leaders, including former energy minister Hammad Azhar, Usman Dar, and Babar Awan, while a police constable was also shot dead during a raid in Model Town area of Lahore.

People in Punjab, twin cities, Sindh and other parts of the countries are facing inconvenience as the authorities have blocked major roads to stop the Imran Khan-led Azadi March on Islamabad.

All main roads and bridges connecting Rawalpindi and Islamabad with other parts of the country have been closed by placing containers.

Reports said that the motorways police have closed M-2 (Lahore-Islamabad), M-3 (Multan-Lahore) and M-4 (Multan-Faisalabad-Pindi Bhattian) and all interchanges and roads for traffic.

The River Chenab bridge in Gujrat has also been blocked disconnecting traffic with Lahore and Gujranwala.

In Lahore, police have closed the Ravi bridge by placing containers, disconnecting Lahore with other parts of the country.

Police and district officials have also blocked Attock Khurd Bridge on the GT Road in an attempt to disconnect Punjab and KP.

They also closed the motorway M1 connecting the two provinces.

The road blockades across the country to stop the PTI long march on Islamabad is affecting the supply of fuel products in different cities.

The Oil Companies Advisory Council (OCAC) in a statement said that deliveries are being hampered due to closures of roads in the major cities of Punjab.

It said that sufficient stocks of petroleum products are available in the country, including in Punjab. However, it asked people to not go for panic buying .

“There are ample stocks of petrol and high speed diesel (HSD) in the Punjab region and OMCs are making their best efforts to top-up the retail outlets timely, despite the road blockages,” the OCAC said in a statement.

Due to worsening political situation, Board of Intermediate and Secondary Education Lahore and Rawalpindi announced the cancelation of the exam for Matric students for May 25.

The British Council in Islamabad has also announced that “due to the developing uncertain situation all GCE & IGCSE exams in Islamabad & Rawalpindi on 25 May (AM/PM sessions) have been canceled.”

PESHAWAR – Amid the ongoing crackdown against the workers and leaders of his party, the former prime minister ...