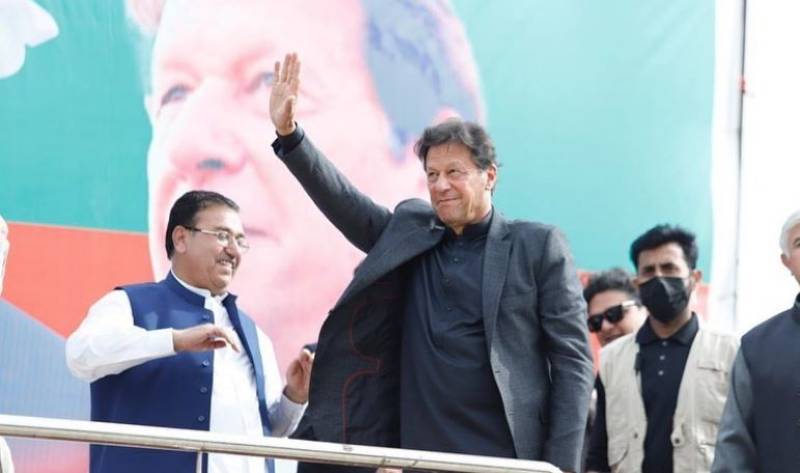 PESHAWAR – Amid the ongoing crackdown against the workers and leaders of his party, the former prime minister Imran Khan said the entire nation is looking toward the neutrals.

Addressing a press conference in Khyber Pakhtunkhwa’s capital, the PTI Chief announced leaving for Islamabad tomorrow amid the crackdown, saying the nation is watching the role of neutrals in the whole scenario, adding that the masses will pass a judgment on them.

The firebrand politician announced leading the ‘largest crowd’ to the federal capital, adding that he doesn’t care about his life despite facing death threats.

Firing a fresh salvo at the Sharif-led coalition government, he asked the judiciary to intervene. Would the judiciary allow the arrests being made? Khan asked and said that permission for such actions would dent the credibility of the judiciary.

He added, saying that it is the test of the judiciary whether they protect democracy to prosper in the country.

Recalling his tenure, the PTI chief said they never stopped the marches by then opposition members during their government.

Lambasting the government’s action, he said the incumbent setup fears that a huge number of women would also come out the roads in the long march. He stated that there’s no difference between the ‘fascist government’ and the military dictators of the past, saying that both used the same tactics.

Cricketer turned politician also urged masses and PTI leaders to break the chains of fear to get rid of the ‘imported government’.

At the outset of his presser, Khan said that this was a ‘defining moment’ for Pakistan that would decide its fate.

Khan called the new Inspector General of Islamabad a ‘criminal’, as he asked the Punjab bureaucracy in what capacity they are complying with the orders of the ‘illegal’ chief minister. PTI chief also cautioned that they are taking a record of the government officials who are following illegal orders.

ISLAMABAD – Sharif-led coalition government has decided to complete its tenure till August 2023 and announced ...

PTI chief also addressed the country's bar associations, asking why they were not condemning the action of Sharif-led federal government. He however commended lawyers who are standing to protect the ‘democracy’.