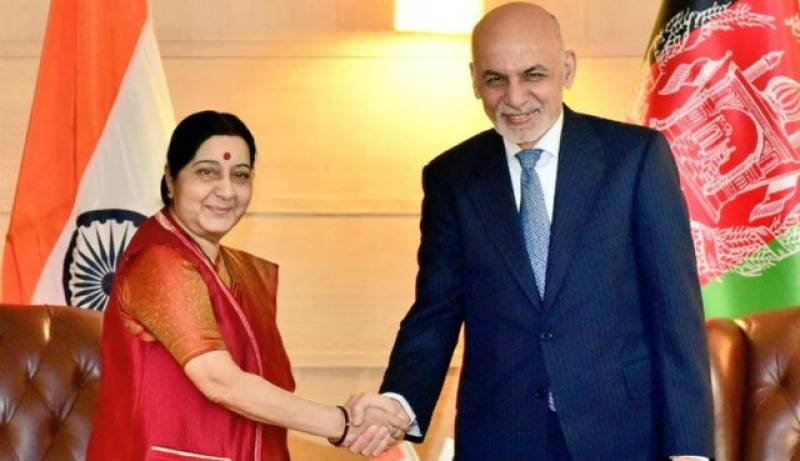 NEW DELHI - President Ashraf Ghani has said that his country will a part of the China-Pakistan Economic Corridor (CPEC) only if Islamabad allows connectivity between India and Afghanistan, according to India media reports.

Mentioning sovereignty issue raised by India, Ghani also warned that if Afghanistan was not given transit access to Wagah and Attari for trade with India via Pakistan, then Kabul will also restrict Islamabad's access to central Asia, the DNA reported.

He was addressing a gathering at the Vivekananda International Foundation in New Delhi.

The comment comes a week after a meeting took place between representatives of Afghanistan, China, Pakistan and the United States in Oman, in which the revival of peace talks with the Taliban was discussed.

According to DNA, Ghani also rejected what he termed a “Pakistan-managed” effort to broker peace in Afghanistan.

"Sanctuaries are provided, logistics are provided, training is provided, ideological base is provided [...] Pakistan has come to a juncture and it needs to make a choice," DNA quoted Ghani as saying. "Our reaction will be determined by its [Pakistan's] choices."

The Afghan president also welcomed India's new role in Afghanistan as discussed in the new US policy for the region.

Talking about the peace process, Ghani suggested that he does not ignore India's role in bringing peace and stability to the war-ravaged country. He said the next round of Kabul process will be held in January next year.

NEW DELHI–President Ashraf Ghani has urged India to invest in Afghanistan's mining sector during his one-day visit to ...

Ghani termed the Trump administration's South Asia strategy a "game-changer" for the region as it "recommends multi-dimensional condition-based approach for the region."

The Afghan president also rejected suspicion in Islamabad that India and Afghanistan have joined hands against Pakistan.

"There is no secret agreement between Afghanistan and India. There are no secret Indian facilities. There is no destabilisation of any neighbours from Afghanistan taking place through implicit or explicit collusion. Let's get out of the word of fiction," he added.