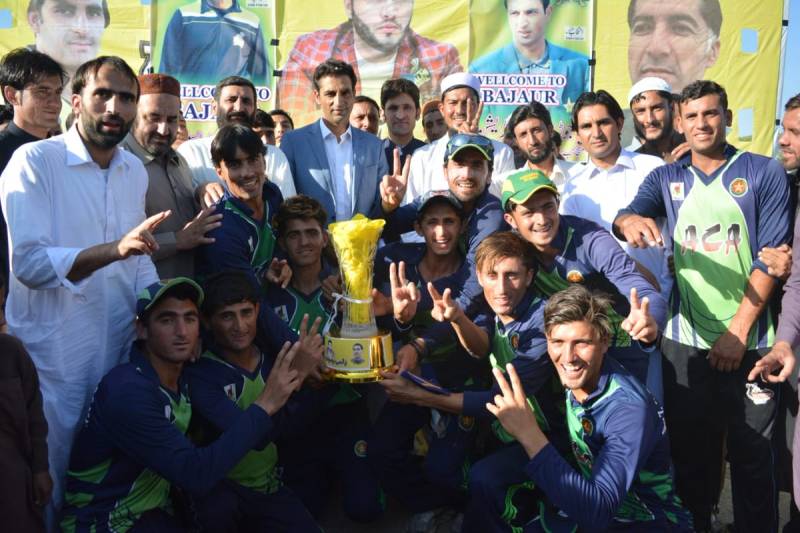 PESHAWAR - Peshawar Zalmi organised the Zalmi Champions Trophy in Bajaur and it proved a historical mega cricket event in that area.

The final of the cricket gala, which continued for one month with 25 teams competing against each other, was held in the sports complex in Khar, Bajaur bewteen Aijaz Zalmi and Alzai Zalmi.

Aijaz Zalmi were crowned champions as they defeated their opponents by 86 runs. Abdullah from the winning side was declared the Man of the Match as well as Man of the Tournament in front of a packed local crowd.

In the final ceremony, students were seen celebrating the cricket fever with joy.

Zalmi Champions Trophy concluded in Bajaur. Head Coach Muhammad Akram distributed prizes amongst the winners. 25 teams competed against each other. Bajaur people applauded the efforts of Peshawar Zalmi for this mega event. Ajiz Zalmi won the final against Alizai Zlami by 86 runs. pic.twitter.com/2DHC9yWPyH

Zahid Shah of Bajaur Zalmi, speaking on the occasion, said that the purpose of the tournament was to promote cricket and healthy activities among the youth.

Peshawar Zalmi Head Coach Muhammad Akram said that the players participated in the event are full of talent and passion for the game. He said that more similar opportunities will help them to showcase their talent at the early level of the game.

Akram praised the efforts of Peshawar Zalmi Chairman Javed Afridi for this initiative and the local body for conducting this event in a befitting manner.

He said that Peshawar Zalmi will soon launch the Zalmi Super League in the Bajaur Agency and will also develop a cricket academy in the sports complex with modern facilities.