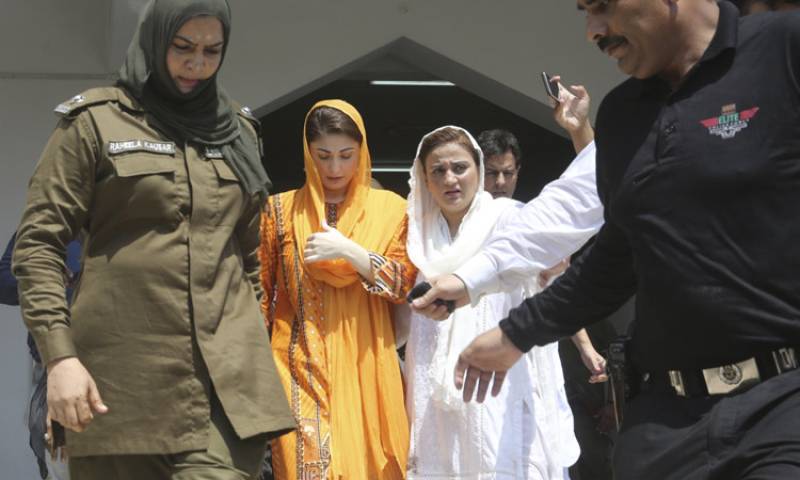 LAHORE – An accountability court on Wednesday turned down a request by the National Accountability Bureau (NAB) for extension in physical remand of Pakistan Muslim League-Nawaz (PML-N) leader Maryam Nawaz and her cousin Yousaf Abbas, and sent them to jail on judicial remand till October 9 in Chaudhry Sugar Mills (CSM) case.

At the outset of the proceedings, the NAB prosecutors, Hafiz Asad Ullah and Haris Qureshi, requested the court to extend physical remand of both accused for another 15 days.

They submitted that their custody was further required for investigations about an agreement of division of properties owned by the family of the accused as it surfaced during the investigations recently.

A total of 14.5 million shares of the mills were divided among Mian Nawaz Sharif, Shehbaz Sharif, Abbas Sharif, their sister Kausar and their mother Shamim Begum whereas the shares of the mills were 26.2 million in 2008, as per the Securities and Exchange Commission of Pakistan's (SECP) record, they said, adding that there was a difference of 11.6 million shares and these were not included in the assets of Sharif family.

They argued that Maryam Nawaz's assets did not correspond to her income in 2008 and Sharif family members had to be summoned for investigations in the matter.

They said that Maryam Nawaz received amount sent by Sadiqa Saeed through telegraphic transfers (TTs) in 1998 and the same amount was transferred to the mills later.

Same year, the accused received Rs 160 million but the relation of the accused with the sender was not clear, they said, adding that Sadiqa also paid loan of the mills.

The prosecutors further submitted that the mills was shifted from Gojra to Rahim Yar Khan at a cost of Rs 1.5 billion in 2015 whereas the sources of the amount had to be determined yet, they added.

They submitted that three foreigners sent shares in the name of Maryam Nawaz in 2008 and the same shares were transferred by Yousaf Abbas to Mian Nawaz Sharif.

They submitted that $ 4.8 million sent to Yousaf Abbas through TTs which was transferred to the mills and the act was aimed to extend benefit to directors and shareholders of the mills.

However, Advocate Amjad Pervaiz opposed the remand plea saying that the bureau had already took remand of the accused on the same grounds.

He submitted that investigations had already been conducted into the matter whereas sale and purchase of shares of mills were done under the SECP rules and Companies Act.

He submitted that the bureau did not have any authority to investigate the matter whereas the SECP was empowered for action in this regard.

He submitted that the mills was established in 1991 and the shares were transferred in 2008 whereas the anti-money laundering act was implemented in 2010 and the same could not be implemented on past transactions.

He said that the Lahore High Court had already passed judgement over Sadiqa Saeed TTS in Hudaibiya papers Mills case whereas the bureau was trying to misled the court on the issue.

He submitted that agreement of division of properties of the Sharif family was in possession of the bureau from day first whereas Mian Sharif died in 2004 and shares were divided in 2008.

He submitted that the bureau had levelled allegations of money laundering against the accused but it failed to give any evidence in this regard.

Subsequently, the court rejected request for extension in physical remand and sent the accused to jail on judicial remand till October 9.

Meanwhile, strict security arrangements were made as policemen were positioned inside and outside the court besides officials of the anti-right force.

It is worth mentiong that the bureau had arrested Maryam Nawaz and Yousaf Abbas on August 8 and they remained on physical remand for 48 days.