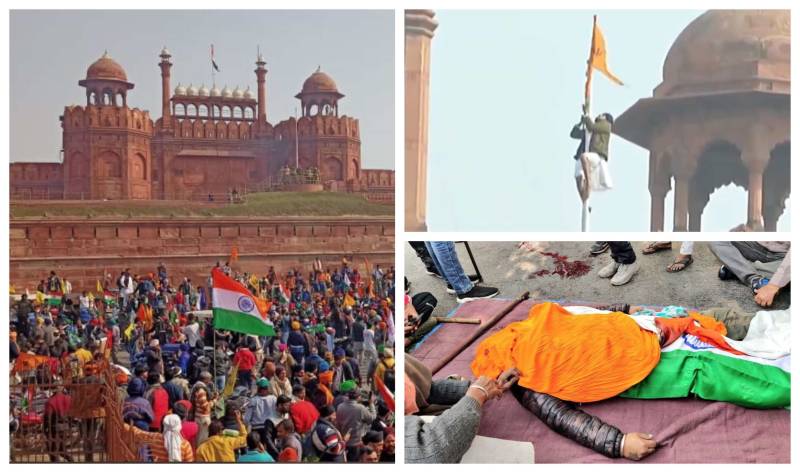 NEW DELHI – At least one protesting farmer has been killed by police gunfire and several were severely injured as police teargased and baton-charged the Indian farmers’ Tractor March that broke through barriers and reached the heart of the Indian capital amid Republic Day celebrations.

The mostly Sikh protestors hoisted Nishaan Sahib, a Sikh religious flag, at the Mughal-era Red Fort. Police have charged the protestors out of the historic Red Fort complex.

The protestors clashed with police on several fronts while breaking through barricades placed for the Republic Day military parade. Some protesters reached a major intersection three kilometres from where Indian Prime Minister Narendra Modi and other government leaders watched tanks and troops parade past and fighter jets fly overhead.

The massive protests have also forced the shutting down of several metro stations and suspension of internet services in many areas of the city and its adjoining areas.

Earlier, New Delhi Police had agreed to allow the rally after several rounds of negotiations on the condition that it would not disrupt the annual Republic Day parade. Farmer leaders claim their protest was peaceful and anti-social elements in their midst were to blame for escalating the situation, reported NDTV.

Disgraceful behaviour by the Delhi Police !!!

Uttarakhand Chief Minister Trivendra Singh Rawat condemned the violence saying, “What was done by some anarchic elements in the name of farmers today in Delhi should not have happened.”

Indian farmers have been protesting for several months now against new pieces of legislation that they fear will drive their revenues down by revoking state-assured pricing safeguards.

One of the main farmer committee's member said the protesters have enough supplies to keep their Delhi camps going for a year if necessary, and that there was "massive popular support" for the campaign.

NEW DELHI – A rally attended by a large number of agitated farmers turned into a battlefield at Singhu and ...