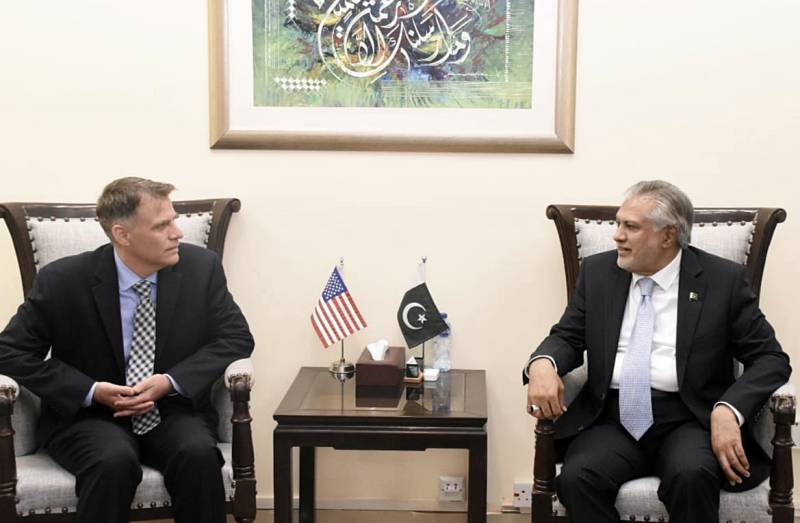 Deputy Assistant Secretary of the US Department of the Treasury for Asia Robert Kaproth called on Federal Minister for Finance Ishaq Dar on Wednesday and Pakistan’s Finance Chief briefed Kaproth on the economic outlook of the South Asian nation.

Reports in local media suggest that Dar told US Treasury officials that Islamabad would honour all its pledges and was in the process of taking tough decisions, including increasing the gas and electricity tariff to put the country of over 220 million back on track through reforms.

Dar however mentioned that ‘Pakistan required breathing space’ citing the worst floods of 2022 that wreak havoc across the country.

Mr. Robert Kaproth,Deputy Assistant Secretary of the US Department of the Treasury for Asia called on Federal Finance Minister Senator Mohammad Ishaq Dar.They discussed economic situation in the country and economic cooperation between Pakistan and the United States of America. pic.twitter.com/fDrtPtPOJx

He apprised the visiting members that reforms were being introduced in all sectors, including energy and capital market, to enhance economic growth. Dar also explained that the Pakistani rupee was also under pressure because of the smuggling of US dollars to neighboring Afghanistan and Iran.

Commending the stringent measures taken by the incumbent government, Dar assured that the country was destined for progress and development. He also briefed Robert Kaproth and the delegation about the damages caused by deluges and their impact on the economy.

Meanwhile, the US Treasury official Robert Kaproth highlights good ties between Islamabad and Washington and assured his support and cooperation on issues.