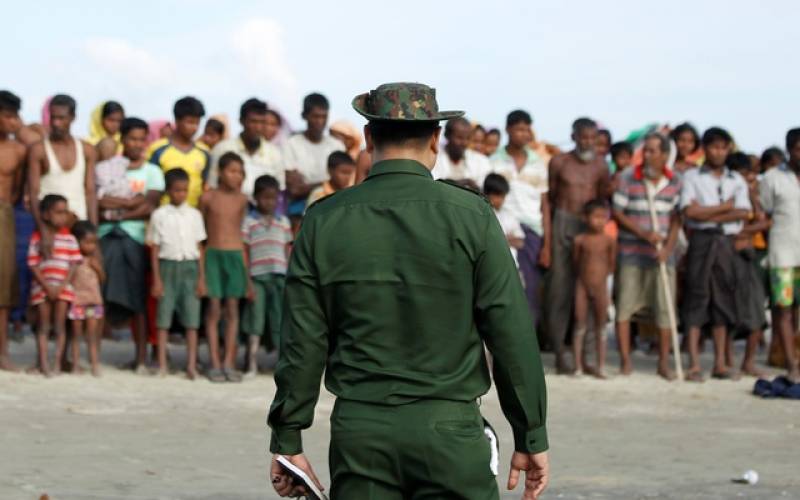 NAYPYIDAW - Myanmar has fired the military general who led the campaign of violence against the Rohingya, after the European Union imposed direct sanctions on him and six other officers.

Within hours of the EU announcement, the Myanmar military announced that one of the sanctioned generals had been fired on Monday and another had left the army last month after being removed from his post.

The seven face asset freeze and are banned from travelling to the EU, after the bloc extended an arms embargo and prohibited any training of, or cooperation with, Myanmar's armed forces, for their pivotal role in the violence in Rakhine state, which has led to 700,000 Rohingya fleeing over the border to Bangladesh since last August.

In a rare example of Myanmar bowing to pressure from the west over the actions of the military, the government responded to the sanctions with an announcement that Maj Gen Maung Maung Soe was being removed from his position, , the BDNews24 reported on Tuesday.

He had been the head of western command in Rakhine during the assault on Rohingya villages and, in a statement, the EU described him as “responsible for the atrocities and serious human rights violations committed … These include unlawful killings, sexual violence and systematic burning of Rohingya houses and buildings.”

The Myanmar government did not refer to the sanctions in its statement and said the general was fired due to weakness in his response to the attacks on police outposts by the Rohingya militant group Arakan Rohingya Salvation Army (ARSA). These attacks, in 2016 and August 2017, are seen as the catalyst for the Myanmar military coming down on the Rohingya community in Rakhine with such brute force.

The EU also imposed sanctions on Lt Gen Aung Kyaw Zaw, whose Bureau of Special Operations No 3 oversaw the western command. He had already been given “permission to resign” in May, while Thant Zin Oo, the commander of the 8th Security Police Battalion, was also named and sanctioned.

The EU sanctions, first reported by Reuters in April, also mark a shift in diplomacy by the European bloc, which suspended its restrictive measures on Myanmar in 2012 to support its partial shift to democratic governance in recent years.

The crackdown on the Rohingya in northwestern Rakhine State, which the United Nations denounced as "ethnic cleansing" by the military, has soured relations.

YANGON - The United Nations has appointed a Norwegian national as an interim resident coordinator in Myanmar and ...

Myanmar rejects almost all accusations of wrongdoing and says it launched a legitimate counter-insurgency operation after coming under attack by Rohingya militants last August.

Two Reuters journalists were jailed while reporting the story and remain in prison in Yangon, where they face up to 14 years behind bars for violating Myanmar's Official Secrets Act.