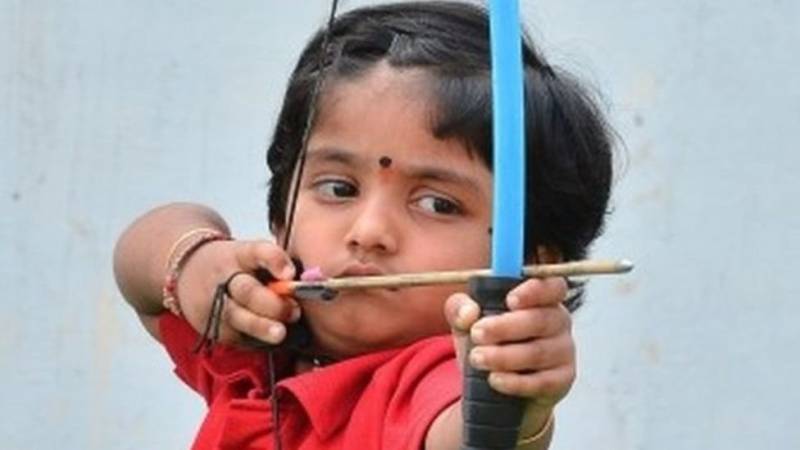 ANDHRA PRADESH (Web Desk) - A two-year-old Indian girl has set a new national record in archery, according to the India Book of Records.

Dolly Shivani Cherukuri from Vijaywada in the southern state of Andhra Pradesh - who turns three next week - became the youngest Indian to score more than 200 points at a trial event the other day, the Press Trust of India reported.

Her achievement was witnessed by senior sports personalities and India Book of Records officials.

"We are all very impressed and proud of her," Archery Association of India official Gunjan Abrol told the BBC.

Dolly was conceived through surrogacy after the death of her brother, international archer and coach Cherukuri Lenin, in a road accident in 2010 reports said.

Her father, Cherukuri Satyanarayana, said she had been trained since birth to be a champion.

Satyanarayana said they had arrows specially made for the toddler out of carbon when she was first learning the sport to ensure they were light enough for her to carry.

Archery experts say children are trained on lighter bows and Abrol says Dolly's bow would also have been very light.

"You can't put too much pressure on children, they can be trained for a maximum of two or three hours a day," he said. "But Dolly comes from a family of archers so she's capable of a lot."