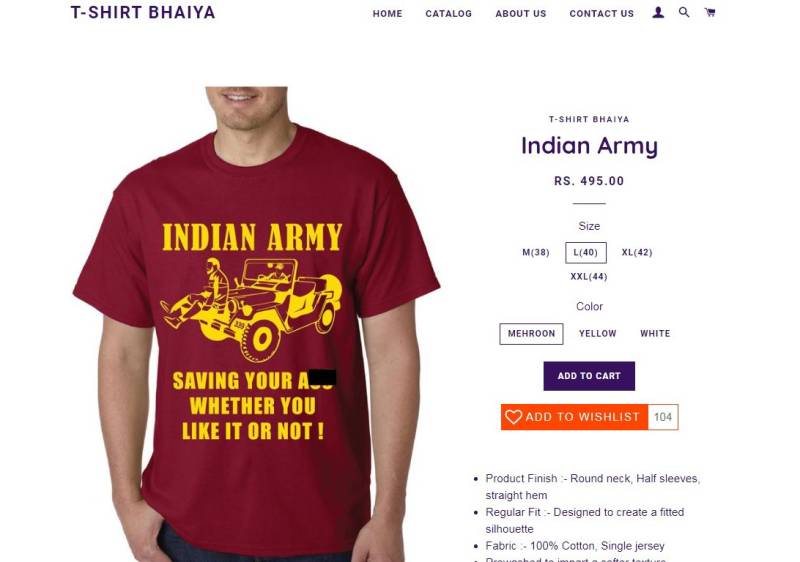 NEW DELHI - A controversy erupted after an online Indian store put a T-shirt with an image on the front showing a Kashmiri civilian tied to the bonnet of Indian army jeep on sale.

A social media user shared the images of the controversial shirt on Twitter.

An indian company is selling T-shirts that glorify Indian Army tieing a Kashmiri civilian Farooq Ahmad Dar to the bonnet of the jeep and using him as a human shield.
The t-shirts are now sold out in all colors and sizes. @cjwerleman @HerNameIs_Bea @dr_rita39 @SuddhanSadaf30 pic.twitter.com/27JNv7LHGU

The photo of Kashmiri youth named Farooq Ahmad Dar had gone viral over the internet last year in April showing a man being carried along as a human shield. 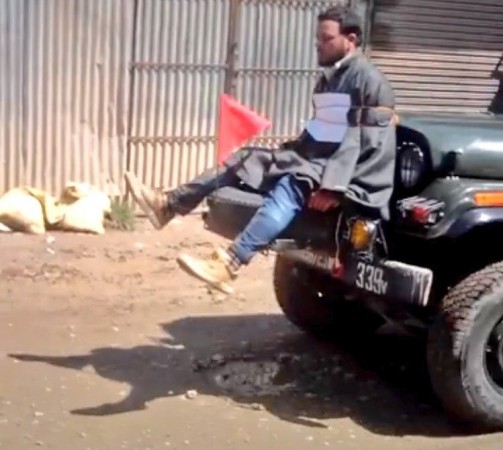 Dar, a resident of Chil village, had been paraded through several villages of Indian Occupied Kashmir strapped to the front of an Indian military jeep.

Major Nitin Gogoi, who had tied the 26-year-old Kashmiri man to the jeep was praised by the military and awarded a commendation card, according to Indian media reports.

SRINAGAR - A viral photo showing a Kashmiri man tied to Indian Army Jeep is exposing the ugly truth about the Indian ...

According to Times Now, the T-shirt company, which is reportedly linked to ruling party, BJP's spokesperson Tajinder Bagga, painted the disturbing graphic, hailing the human rights violations conducted by the Indian army in Occupied Jammu and Kashmir. The phrase says, Indian Army saving your a**, "whether you like it or not".

Bagga defending his action stated that he is merely “wearing one’s patriotism on one’s chest." Talkin to Indian media, he said that the shirt was a message for Kashmiris, who are fighting for freedom.

The controversial shirt, which is being sold for Rs495, has not only angered the Muslim community but also put the Indian leader on the fire. A BJP leader Ravinder Raina said that supporting country's army is not bad but "I think abusing someone is not a part of our democracy".