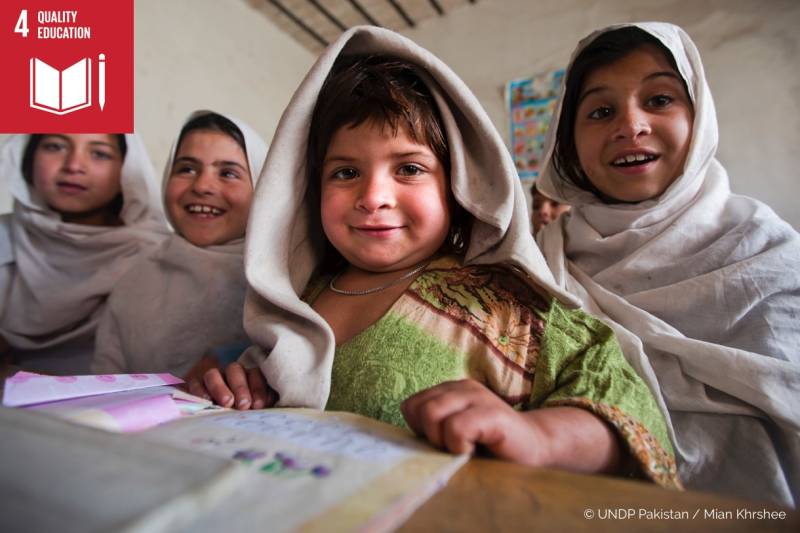 Latest UNESCO report on the progress of SDG4 –Education- to achieve the aims of vision2030 covers both the country profile and its performance. Pakistan being a signatory suffers in some aspects whereas significant strides made in certain aspects are rosy.

The UNESCO depicts the progress of Pakistan en route to fulfilling the promise that ensures the provision of free and equal education to every child by 2030. In it latest monitoring report, the UN body encompasses almost all the necessary aspects and utilizes major indicators to obtain the results.

Sustainable Development Goals (SDGs) are to be met by 2030 and ground realities indicate that it seems impossible for Pakistan to accomplish. Not due to lack of potential but the priorities of our government leading to trivial and temporary issues, seem to fail the nation in the education sector. UNESCO’s monitoring report vividly depicts that the progress made by Pakistan is either minimal or backward.

School life expectancy and transition rate from primary to secondary

In primary section, 2.38 percent male students had to repeat the class which was .74 percent higher than the repeaters in 2015. In 2016, 2.26 Female primary students by a rose of 0.61 percent from 2015 repeated the studies. Survival rate to the last grade of the primary section for male students in 2015 79.03 percent whereas it was 75.1 percent for female students. In total 79.03 percent of kids studying in primary schools could complete their education. The transition rate from primary to secondary in 2015 was 86.61 for female, 85.92 for male and 86.22 in total. An increase of almost 10 percent in the female, 6.90 percent and 7.67 percent in total was observed from the previous year.

The public sector expenditure on education as a percentage of GDP depicts their lack of interest in educating the nation. If we compare the expenditure on education of 2006 and 2016, we are shocked: in 2006, it was 2.63 whereas in 2016 it was 2.49. Keeping in mind the inflation rate, it can be concluded that misplaced priorities and lack of interest in people’s betterment have deprived the kids of the desired level of provision of education in Pakistan. The ratio of trained teachers here depicts the pathetic conditions of the education sector. Pupil/trained teacher ratio by the lower secondary level of education was 30.33 percent in 2016 as compared to 28.24 percent in 2015.

Unfortunately, 3.88 million male and 6.25 million female population aged 15-24 years were illiterate in Pakistan by 2014. While the illiterate female proportion of 15 years and older numbered 32.6 million and male illiterate segment counted 18.95 million in 2014.

UN intends to bring change, a global change leading to sustainability, equality. Education -SDG 4- targets to be achieved by 2030 are as following:

By 2030, ensure that all girls and boys complete free, equitable and quality primary and secondary education leading to relevant and effective learning outcomes

By 2030, ensure equal access for all women and men to affordable and quality technical, vocational and tertiary education, including university

By 2030, substantially increase the number of youth and adults who have relevant skills, including technical and vocational skills, for employment, decent jobs and entrepreneurship

By 2030, eliminate gender disparities in education and ensure equal access to all levels of education and vocational training for the vulnerable, including persons with disabilities, indigenous peoples and children in vulnerable situations

By 2030, ensure that all youth and a substantial proportion of adults, both men and women, achieve literacy and numeracy

Build and upgrade education facilities that are a child disability- and gender- sensitive and provide safe, non-violent, inclusive and effective learning environments for all

The role of media in raising the education problem and vision 2030 is too bleak. Understanding that a major part of social evils, health issues and poverty are children of lack of education has to be developed by the media. Instead of breaking news all the time, there is a dire need of exhaustive debate involving the common man and the policy-maker alike.

The root cause of dominant prevailing problems is directly related to the provision of quality education in Pakistan. People are forced by poverty going to the Middle East and work in extremely harsh conditions while innumerable children, at a very early age, have to start working for only PKR 50 to PKR 100 per day here.

Funds allocated to education here are shamefully less than required to meet the vision 2030. From 2006 to 2016, according to UNESCO, the annual allocation has never exceeded 2.75 percent as % of GDP.

The government policies and efforts on implementation of devised strategies on the provision of free education, infrastructure, training teachers and maintaining ideal pupil/teacher ratio are direly insufficient since 60.77 percent rural population of the country either was deprived of proper education facilities or required number of schools in 2014. In absence of effective allocation followed by meaningful monitoring of allocated funds, it’s impossible to attain the desired results. The catastrophe worsens with policy-making fora facing a dearth of education experts well-versed with on-the-ground challenges.

Education is at large a neglected and unworthy dimension for the provincial representatives even after becoming a provincial issue in Pakistan after the 18th Amendment. Seldom discussed and comprehended it carries the least value. Even in elections the slogans like electricity, developmental project – roads, bridges etc. –are sold by the politicians. And it’s unfortunate that the clutches of poverty and ignorance force people to buy these temporary but visible results. For a country with 43.31 million population falling in 15 to 24-year age bracket, the government seems to invest heavily in building roads instead of building schools and reforming the education system.