Army vs. Nawaz Sharif: Who prevails? 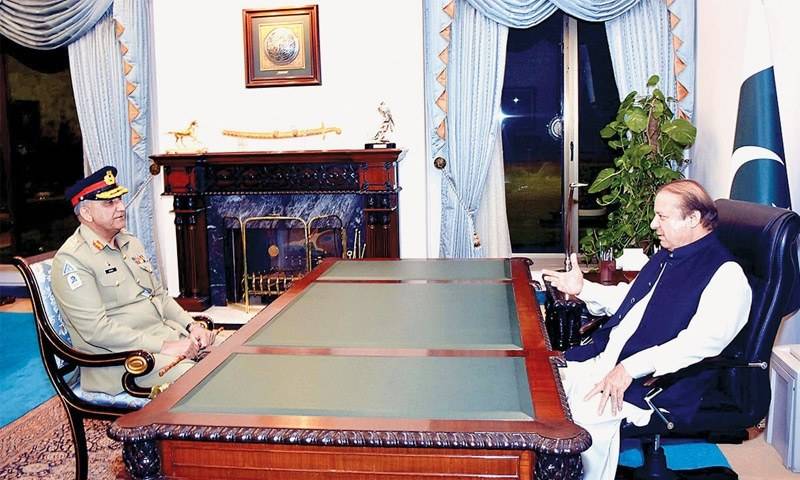 A Saga of Failures:

The deposed Prime Minister Nawaz Sharif’s strategy to politically survive is falling apart bit by bit. He has all the unfavourable options in a fast-changing political landscape of Pakistan. Some options are bad, others are worse, to say the least. He has been failing to handle defiant senior members of his divided political party, an active judiciary and, more particularly, the powerful army whom he blames for being behind the Supreme Court which ousted him in July this year over concealment of his overseas assets.

No one deserves to be blamed more for troubles Nawaz Sharif is facing than himself, since he is the one who has been committing political blunders one after the other. He clearly lacks a political insight first to foresee an evolving political crisis at his doorstep and when it erupted he then exhibited his inability to contain it after Panama papers scandal made headlines last year. Nawaz Sharif had options to resign days and weeks before the Supreme Court disqualified him. His ouster was foreseeable after investigators clearly found hard pieces of evidence about his and his family’s involvement in money laundering and concealment of their overseas assets. His failure to do so has led him to be banned for life from contesting parliamentary elections. He was self-assured that his development work would help him to bring out a massive number of people to get him restored if he is disqualified. However, the public response was poor in the long march he undertook from Islamabad to Lahore despite the fact that the ruling party misused the state machinery to bring out people on the roads. Before his disqualification in July, the ruling party leaked reports to the media that Nawaz Sharif carries the treasure of secrets which he would reveal one by one to the people if he was ousted by the Supreme Court. His forewarning to the judiciary and the army did not work. However, he has politically survived for the time being after the ruling party’s tricks to get him re-elected as the party President, something unlikely to last long as the superior courts are expected to strike down the controversial law sooner or later. Once this happens, it would trigger a split within the party.

Army’s political agenda behind the ouster of Nawaz Sharif

Nawaz Sharif as Prime Minister pursued a policy to overcome irritants with the army through compromises to perpetuate his government when he found the military in an aggressive posture. However, he risked engaging in intrigues against the military when he mistakenly thought he can establish “civilian supremacy” over the most powerful state institution. The army has sustained its interventionist role in the political affairs that in theory has to be the domain of elected leaders who are failing themselves and the democratic systematic through corruption and bad governance.

The army has been pursuing a political agenda against the political parties and politicians who it believes are not in sync with its geo-strategic policy on Indian held Kashmir and the US occupied Afghanistan. Behind the scenes, Nawaz Sharif as Prime Minister unsuccessfully tried to reverse the geo-strategic policy in the region through intrigues such as leaks to local media in November last year. That was designed to send a clear signal to the Western capitals that he was determined to reverse the country’s long-drawn alleged policy to back militants of choice in held Kashmir and war-torn Afghanistan, sixty percent of which is under control of Taliban.

The corruption is not as big a concern for the army as is to shield its decade's old geostrategic policy in the region. And politicians opposing it have faced the music and those who have not, are likely to face it in the months and years to come. Nawaz Sharif, perceived to be pro India, was the second target after Altaf Hussain of MQM.  Asif Zardari, the former President would be the next in line over his obvious involvement in 2011 in MemoGate scandal which involved his role in countering the army’s geo-strategic policy in league with Pentagon.

Why did the Military comply with the Supreme Court’s orders?

The Panama Paper scandal was a blessing in disguise for the opposition parties and particularly the army which, in a rare move, decided to go all out to comply with the orders of the Supreme Court to engage in a marathon exercise through Joint Investigation Team (JIT) to probe money-laundering charges against Sharif family. The JIT successfully found fresh hard evidence of money laundering and retrieved previously investigated documentary proofs on the basis of which the Supreme Court disqualified him and ordered his and his children’s trial which in all legal probabilities is likely to get them convicted.

The army has a history of non-compliance of orders of the superior courts such as its support to Nawaz Sharif in his tussle with the judiciary in 1997 and a long list of ongoing enforced disappearance cases. Its rare compliance of apex court orders in Panama Paper scandal was designed to  “ legally get rid of  Nawaz Sharif” who the army perceived was more inclined to pursue the geo-strategic agenda of the US and India on held Kashmir and the occupied Afghanistan than that of his own country.

Why Anti-military & judiciary rhetoric is untenable

Nawaz Sharif probably never seriously entertained the thought that the judiciary which traditionally had a soft corner for him over the course of decades, would no longer engage in the game of “ technical justice”  he had netted through legislation to save himself from being caught red-handed in money laundering. At the core of his repeated failures lies his over-confidence to win over judges and military through backdoors channels while simultaneously his party remained engaged in an extensive propaganda campaign to deny the evidence of money laundering.  He along with three children completely failed to produce the money trail with which the properties in London were purchased through offshore companies.  Justice Asif Saeed Khosa in his verdict highlighted the tactics his government used to prevent civilian institutions to independently probe serious charges of money laundering against him and his children in Panama Paper scandal.

Justice Khosa while disqualifying Nawaz Sharif pointed out that had the deposed premier been allowed to go scot free, it would have sent a negative message to the public at large on how an elected Prime Minister misused his authority by presiding over state institutions which were bound under the law to independently probe money laundering charges against him. The other three judges, however, ordered a further probe by engaging the army in the investigation process and that is where the real trouble started for Nawaz Sharif.

Civil-military tension syndrome has not gone beyond intellectual discourse among intelligentsia and media-men. His tussle with the judiciary and more particularly with the army has caused fissures within the senior and mid-ranking leadership including his younger brother and Chief Minister of Punjab Shahbaz Sharif. There are genuine fears among the senior leaders that anti-military rhetoric propagated by Nawaz Sharif and his politically immature daughter Maryam Nawaz may create politically unfavourable conditions which could cost the party the next general elections.

In June 2015, the former President Asif Zardari was in a somewhat similar situation when he made a hard-hitting speech against the military establishment which had collected hard evidence on how he has been siphoning off public funds through his handpicked officials and ministers in Sindh province, his party has been ruling over. At the end of the day, Zardari abandoned his rhetoric and hence politically survived at least for the time being. Altaf Hussain however, sustained anti-military rhetoric and the net result was that his party has shattered into pieces and he himself now is suffering from political isolation.

But there is a flip side. The military has opted to discriminatorily spare its ex-chief General Musharraf allegedly involved in a far more serious breach of national security during his dictatorship. He compromised key geo-strategic interests of the state in addition to his alleged involvement in financial corruption. The army instead has been shielding him apparently to retain a deterrence of coupe against the elected governments.

Shahbaz Sharif is facing Rs 1.2 billion charges of money laundering, according to Ishaq Dar, the Finance Minister who made revelations in a confessional affidavit in 2000 before a judicial magistrate. The confession provides specific details on how money was channeled illegally from Pakistan to abroad on behalf of Nawaz Sharif and his brother Shahbaz Sharif. Later Dar retracted his statement and argued that he did so under duress from the then military regime. Subsequently, Lahore High Court set aside his confessional affidavit. The NAB under the influence of Sharif family played a legal trick by not filing an appeal with the Supreme Court against the unusual split High Court verdict. On the Supreme Court’s insistence during the proceedings of Panama Paper case, the NAB has now finally filed a petition with the apex court to reopen the case. If this case is reopened, Shahbaz Sharif’s likely to be bracketed with his brother to face trial on money laundering charges.

What is at stake for the army and judiciary?

People would cast doubts on the Supreme Court if it further delays the reopening of a critically important case involving confessions of Dar against Shahbaz Sharif. If the Supreme Court takes up the NAB petition to reopen the case against Shahbaz Sharif, there is a greater likelihood that he would not abandon his brother and if the apex court continues to sit on NAB’s petition  and Nawaz Sharif sustains his anti-military rhetoric, the Chief Minister of Punjab along with Chaudhary Nisar and others may abandon the deposed premier. This would strengthen Nawaz Sharif’s propaganda line of the nexus between judiciary and army in his ouster despite the fact that his disqualification and subsequent trial was based on hard shreds of evidence.