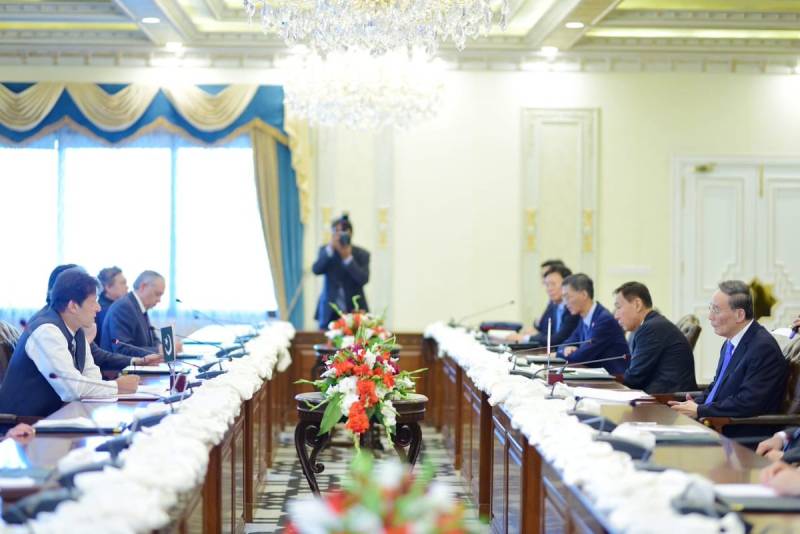 ISLAMABAD – Pakistan and China on Sunday while reaffirming their 'All-Weather Strategic Cooperative Partnership' resolved to further strengthen bilateral relations in all spheres including political, economic, trade and people-to-people exchanges.

The bilateral ties were discussed during the delegation-level talks between Prime Minister Imran Khan and Chinese Vice President Wang Qishan, who is visiting Pakistan on the invitation of the prime minister.

During the interaction, the two leaders exchanged views on the entire gamut of bilateral relations.

Recalling his visit to China last month to attend the 2nd Belt and Road Forum (BRF), PM Imran expressed satisfaction at the results of the visit and highlighted the significance of high level exchanges in cementing the abiding friendship between the two countries.

The vice president thanked the prime minister for the warm hospitality and reiterated China's strong support for the agenda of socio-economic uplift and people-centered development.

He also expressed satisfaction at the increasing momentum of bilateral engagement between the two countries.

ISLAMABAD – The Vice President of China Wang Qishan Sunday was accorded red carpet welcome as he arrived on three-day ...

Among other things, the vice president underlined the importance of frequent leadership-level exchanges, the salience of CPEC projects in diverse sectors, expansion of bilateral trade in a balanced manner, promotion of investments, and increase in cultural and people-to-people exchanges with a special focus on youth and the media.

The two sides also exchanged views on the regional situation, including recent developments in South Asia.

The vice president lauded Pakistan's constructive approach and new initiatives for forging peaceful and cooperative relations in the neighborhood.

He also expressed China's appreciation for Pakistan's sustained and successful efforts in the fight against terrorism and reaffirmed China's steadfast support in this regard.