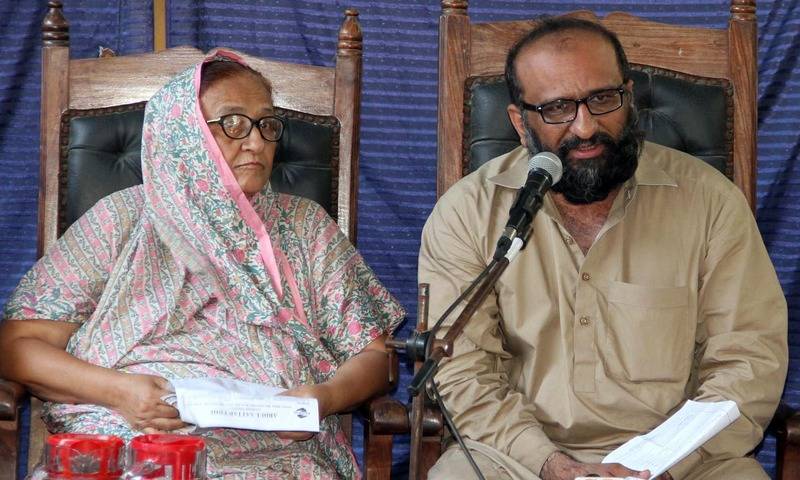 KARACHI -  The wife of celebrated social worker Abdul Sattar Edhi, Bilquis Edhi complained that the welfare centres operating under the banner of Edhi foundation have been illegally occupied by 'influential local figures' in several cities and towns of Sindh.

Addressing a press conference in Karachi on Wednesday, Bilquis requested the Sindh and the federal government to help regain the possession of the properties of Edhi foundation.

Not only were the centres in Sindh being occupied but according to Bilquis, an Edhi centre in Hub was also reportedly occupied for which she requested the Balochistan government to take necessary action.

Flanked by her son Faisal Edhi, she alleged that the land mafia enjoyed the patronage of certain political parties.

They said that the 'anti-humanity elements' were demolishing the welfare foundation's properties to build shops and centres for commercial activities.

'The centres that had been serving humanity for the past three decades are being demolished' the Edhis maintained.

They said the land for these centres had been allotted to the Edhi Foundation by the National Highway Authority (NHA) to set up these centres on 200 square metre wide belts of land on both sides of the highways as these were the property of the highway authority.

Faisal Edhi expressed that the most recent occupation was of an Edhi Welfare centre in Thatta, that had been functioning since 1985.

Sobbing over the threat posed to the philanthropic foundation, Bilquis Edhi lamented that authorities had not taken any action against the people who were 'targeting the Edhi Foundation'.

Apart from the illegal occupation, Bilquis also expressed concerns for Edhi ambulances and social workers who, according to her, were not safe and vulnerable to attacks by 'evil forces'.

Edhi Foundation is the world's biggest non-governmental welfare organisation founded by Abdul Sattar Edhi dubbed Pakistan's 'Father Teresa' back in 1951 when he opened his first clinic in the metropolis.

The Edhi Foundation now provides a broad range of free social services, including ambulances, orphanages and support for the elderly and disabled.

With the demise of Abdul Sattar Edhi back in July last year, the Edhi family registered multiple complaints about the mistreatment they were receiving.

The first complaint in this regard was the torture that the grandson of late philanthropist, Ahmed Edhi faced when he was beaten up by police officials in the Sir Syed town locality of Karachi.

Edhi's grandson claimed he was beaten and manhandled by police officials during routine checking while he was returning home.

Moreover, in November, Faisal Edhi claimed that donations to the Edhi Foundation plummeted to a large extent after the death of his father.

'Donations to the Edhi Foundation have declined after the death of my father. We are facing hard times at present both emotionally and financially. I would urge Pakistanis abroad to help us continue Edhi’s mission of serving humanity,' he had said.