Indian PM Modi targets Pakistan, China at UN, but not by name 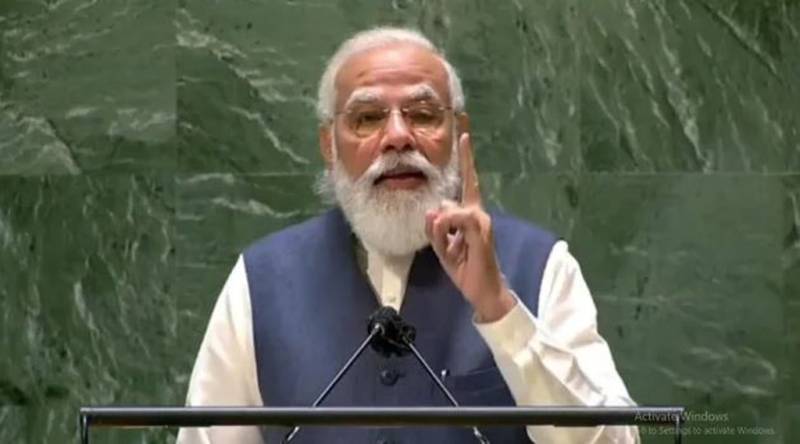 NEW YORK – Indian Prime Minister Narendra Modi in his speech at the United Nations General Assembly (UNGA) didn’t directly mention neighboring countries but the target of his address was quite clear.

From terrorism to maritime security, the BJP leader touched upon a range of global issues in his 22-minute in-person speech but didn’t mention the grave situation in Indian Illegally Occupied Jammu and Kashmir (IIOJK).

Modi, who takes a dig at arch-rival neighbor at world forum, said “We need to be alert and ensure that no country tries to take advantage of the delicate situation there, and use it as a tool for its own selfish interests”.

The Indian PM called for a global response against terrorism, however, he didn't express any concern toward rising Islamophobia in his country as Muslims are being tortured amid the BJP’s Hindutva-driven ideology.

He called upon the world leaders to help the women, children, and minorities of Afghanistan despite the fact that atrocities including extrajudicial killings, arbitrary arrests, cases of torture, pellet gun injuries, and rapes are on the rise in the occupied Kashmir.

He also avoided responding to Pakistan’s dossier that mentioned the suspected use of chemical weapons by India against the Kashmiris.

ISLAMABAD – Pakistan has firmly rejected a claim made by India at the UN General Assembly that Jammu and Kashmir ...

Meanwhile, his concerns on Afghanistan seem like a crass joke as earlier Pakistani Prime Minister Imran Khan, held India responsible for terrorism in Pakistan pointing out that IS was using the Afghan territories to operate against Pakistan with Indian support.

Modi also highlighted what he called the need to protect oceans from ‘the race for expansion and exclusion’. India and China have long competed for influence in the Indian Ocean, he said.

On the other hand, the Kashmiri diaspora protested outside the Indian consulate in Birmingham and outside the UN's office in New York against Modi’s speech at UN.

At the occasion of Modi's speech at the UN General Assembly, Overseas Community held a demonstration outside UN's office in New York. The community protested against Modi's brutalities on innocent Kashmiris in IIOJK.
1/2 pic.twitter.com/DioAcZ0gs4