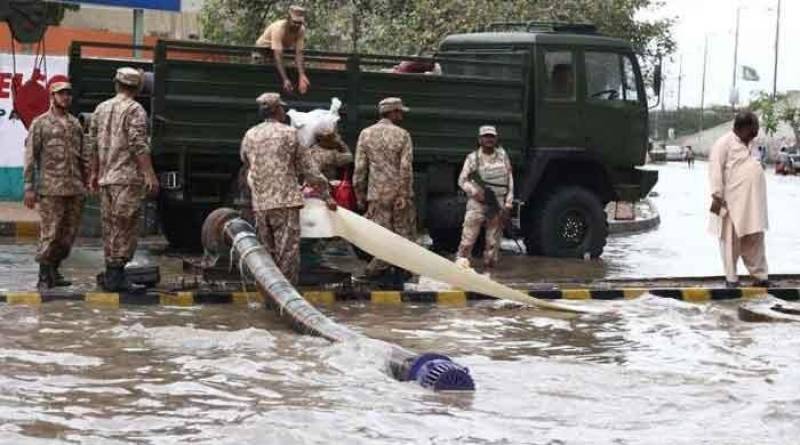 RAWALPINDI – Pakistan Army on Thursday established a Flood Emergency Control Center in Karachi to handle the flooding situation and help people stranded in their homes.

According to ISPR, troops are busy in relief efforts and save the city from more flood water. Besides setting up relief camps in different areas protective bunds are being built to control the flow of water.

It informed that a bund has been constructed by army engineer near M-9 Northern bypass while three plants have been installed for water drainage in Saadi Town, Malir and in another area.

A crack in Malir Lake has also been repaired.

It further said that affected people are being rescued through boats while food is also being provided to them.

KARACHI - A woman suffering from crippling disease of polio drowned in her house on Thursday after urban flooding hit ...

The military’s media wing said that several areas in Karachi have been flooded due to continue rains. It added that Pakistan Navy divers have recovered two bodies from Shah Faisal Town and Korangi area while an aerial surveillance of different areas is also being conducted.

The relief efforts are also underway in Dadu and Hyderabad.

At least five people died in Karachi in rain related incident in port city. A polio patient is also among the victims who lost her life after her house flooded by rainwater.

At least 14 people have died since August 21, which marks the fifth monsoon rain spell of Karachi and sixth for Sindh.

Meanwhile, Hub Dam — which provides drinking water to Karachi and several areas in Balochistan — has reached its maximum capacity. The spillways of the dam have been opened to release excess water into Hub Lake, which falls into Arabian Sea in Balochistan.