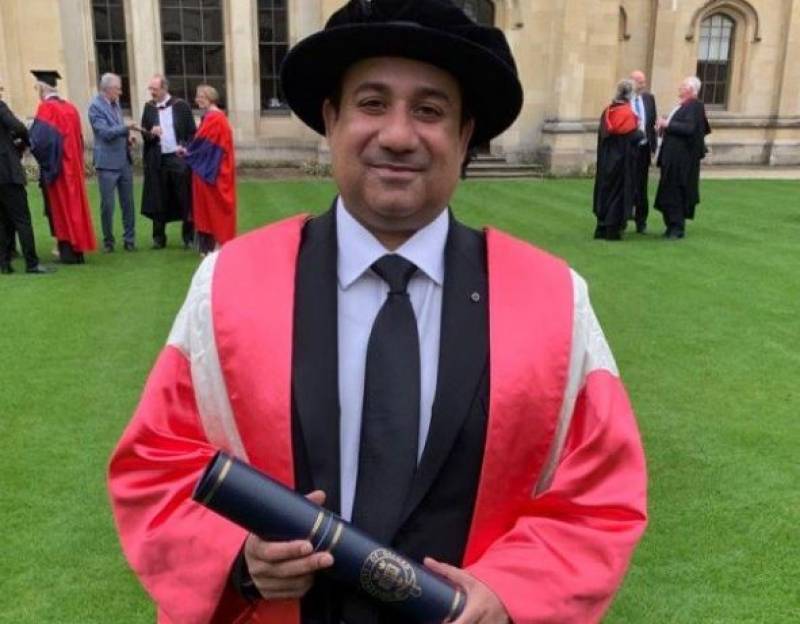 Legendary singer Rahat Fateh Ali Khan has been awarded with an honorary degree by the University of Oxford on Wednesday.

He was awarded with the prestigious doctor of music degree. Khan is among eight other individuals who received their honorary degrees at the ceremony.

"I am honoured to be accepting this degree from Oxford university, a world famous educational institution,” said Khan.“This will be a very special day for me, my family and also my fans who have shared this honour with me. I am happy that my music has allowed me to reach such incredible heights.”

Here to the world and all the well wishers of #UstadRahatFatehAliKhan Presenting Dr Rahat Fateh Ali Khan@UniofOxford pic.twitter.com/JrxXSd9IrP

On receiving his honorary doctorate, Rahat Fateh Ali Khan is set to perform live at Oxford Town Hall on Thursday.

Oxford University has previously recognized the work of Ustad Rahat Fateh Ali Khan as they named one of their prestigious music halls after the music maestro. He is the first South Asian artiste to have received such an honour.

Earlier, while announcing that Khan would be awarded an honorary degree, Oxford University described him as a “Pakistani singer, primarily of Qawwali, a devotional music of the Muslim Sufis”.