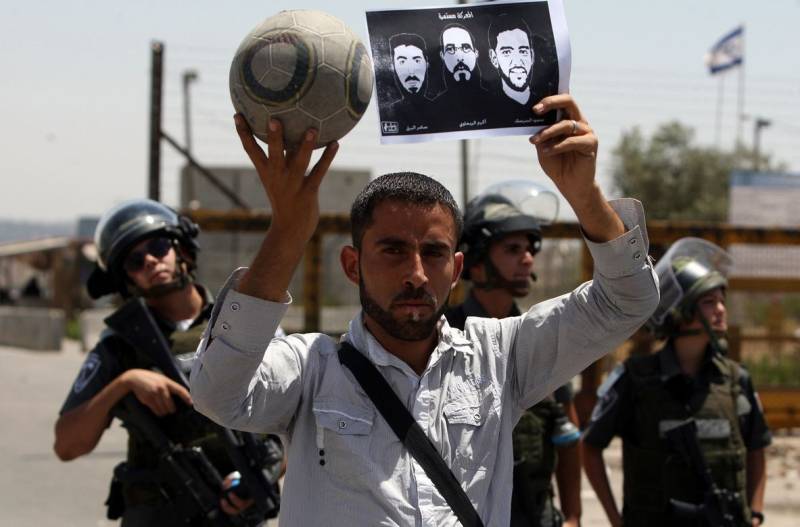 RAMALLAH (Staff Report) - While six Fifa senior officials are under Swiss police detention over corruption charges, Palestinians are kicking their conflict with Israel into the arena of international football with a push to have Israel barred from Fifa. 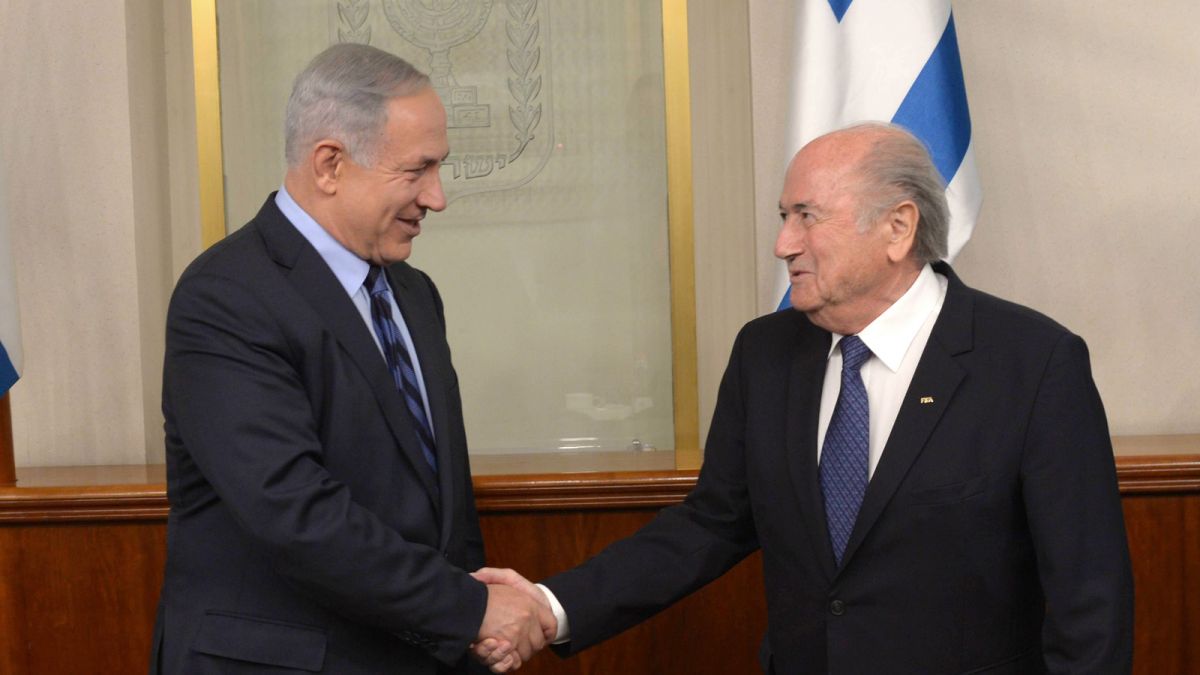 Six football officials were arrested from a five-star hotel in Zurich on Wednesday over corruption charges at governing body Fifa.

There are also reports that the arrested soccer officials were in disagreement with Blatter's unnatural proneness to Israel. Their arrests, although being solely reported to be in connection with alleged corruption, also may have an analogy to Friday’s vote at Fifa’s Congress on Israel’s suspension from international football.

From the beginning of controversy started in 2014, the issue of Israeli suspension has not been resolved, as Sepp Blatter objects to the proposed suspension. On Tuesday, Mr Blatter arrived in the region for meetings with Israeli and Palestinian leaders and sporting officials aimed at defusing the conflict and avoiding a vote in Zurich this week. 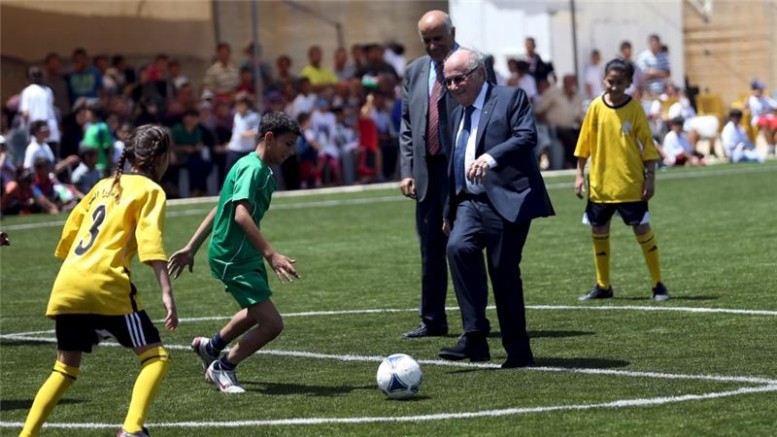 The vote at Fifa’s May 28-29 Congress would need the support of three-quarters of 209 member federations to pass.

Palestinian players have been killed in the latest Israeli war on Gaza and in confrontations with Israeli forces in the West Bank. Others were injured or detained, including Johar Halabiyeh, an Abu Dis player who was shot 11 times in his legs in January 2014. 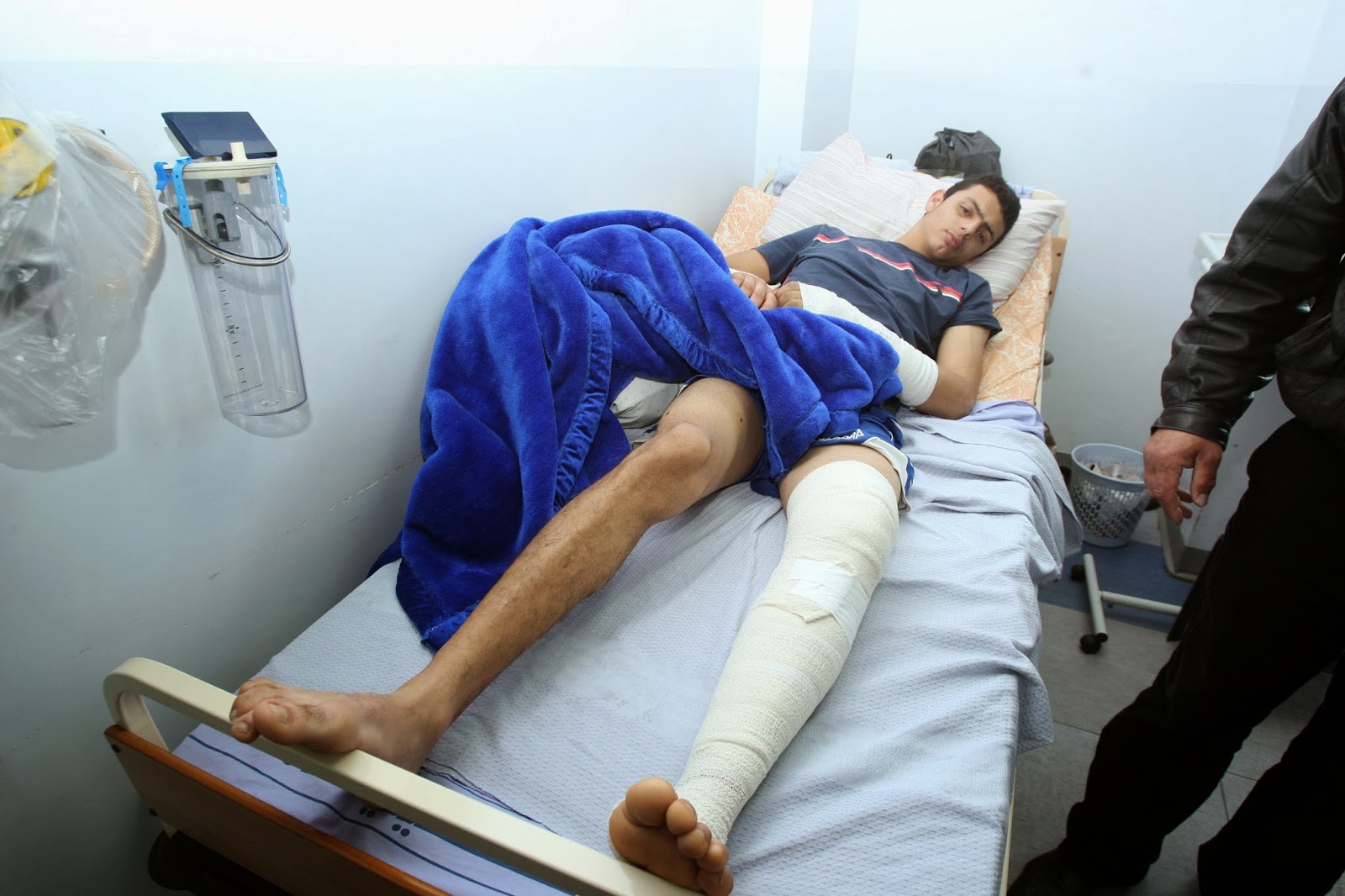 Israeli authorities have imposed restrictions on the building of sports facilities, while Israeli forces have broken up games and even attacked the Palestine Football Association (PFA) headquarters.

For the past two years, the PFA has been filing complaints to FIFA over Israel's systematic violations. Last week, the PFA pushed for a vote to suspend the Israeli Football Association (IFA) membership in FIFA.

The Palestinian proposal is expected to be discussed in FIFA's upcoming congress in Zurich on May 29. "It's not about suspending the Israel Football Association (IFA); it's about our rights. This is a fair deal," PFA president, Jibreel Rajoub, told Al Jazeera. 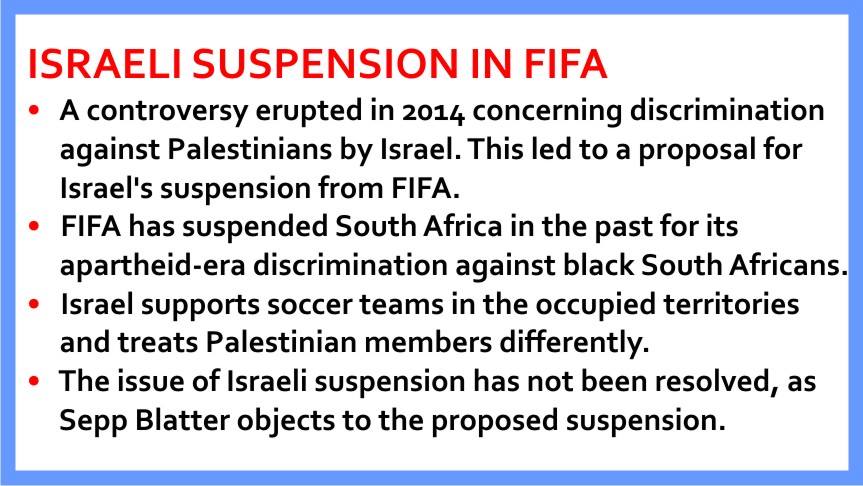 In a bid to give rebirth to PFA, Abdulfattah Arar, recently appointed as the head coach, is handpicking 22 players to represent Palestine, arrange boot camps, manage the team and motivate the players.

But when asked about the most difficult task associated with his new post, Arar had one answer: ISRAELI OCCUPATION.

"It's probably psychological, but I never really thought of impediments to the game other than those imposed by the Israeli occupation," Arar told Al Jazeera.

The PFA was established in 1928 during Palestine's British mandate, and only joined FIFA after the Palestinian Authority was established in 1998. The team played in World Cup qualifiers in 1934, but did not qualify until 1938. However, the game suffered setbacks amid the 1948 displacement of hundreds of thousands of Palestinians from their homes, the Israeli occupation of the West Bank and Gaza, and two Intifadas.

Arar, who played football with Ahli al-Khalil team until 2000 before he started his career as a trainer and coach, said the worst years for football were those during the second Intifada. "We lost so many talents. Movement restrictions were tight and pitches were turned into military zones." 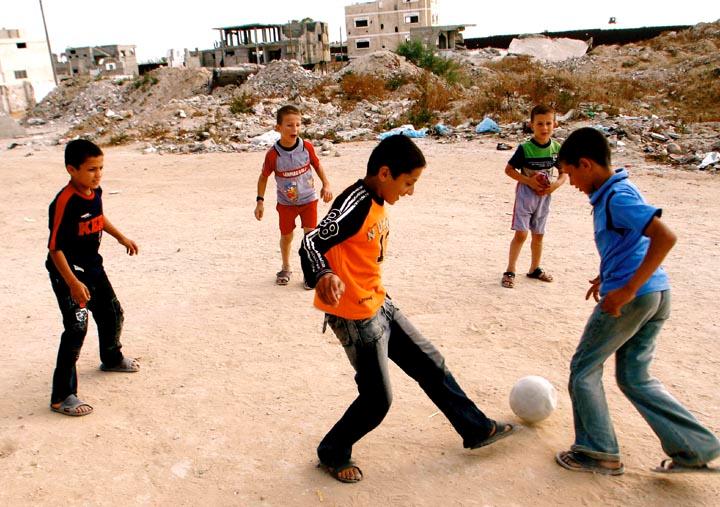 Forming the team with Palestinians from both parts of the geographic divide - the occupied West Bank and the besieged Gaza Strip - is a challenging task, Arar said. "I am not allowed in Gaza; the Israelis won't give our players permits to cross from there to the West Bank," he said.

In addition, players are systematically harassed, delayed, and detained at checkpoints and crossings, Arar said, echoing complaints from the PFA.

In Arar's hometown of Beit Ummar, northwest of Hebron, the local team has dropped from the top tier after seven of its players were arrested by Israeli forces for allegedly throwing stones.

In addition, the PFA has complained multiple times about delays in equipment shipments. In one case, the PFA had to pay a $15,000 storage fee for a shipment that was "mistakenly" stored in a large bin in 2010. 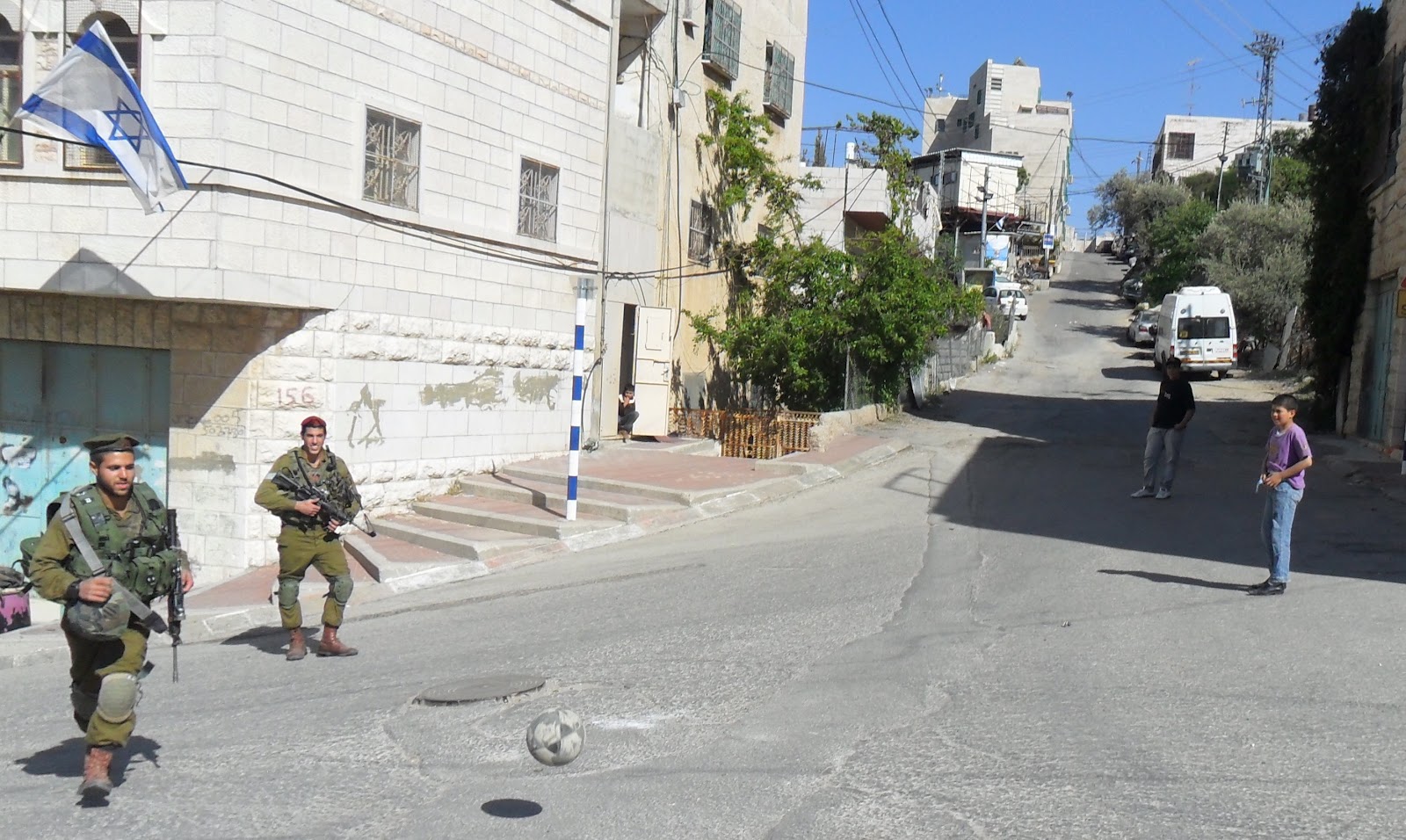 In the football world, a suspension would mean that Israel, as a member of Union of European Football Associations (UEFA), would no longer compete in the Euro 2016 qualifiers and its clubs would be barred from the competition.

However, many believe the Palestinian Fifa motion is connected to wider efforts to expose what activists say are racist policies of the Israeli occupation. In 1964, Fifa opted to expel the South African Football Association because of its stance on apartheid.

Palestinians need to gain a three-quarter majority among Fifa's 209 members to pass the motion. Rajoub was optimistic about the prospects: "No one I discussed this with in Fifa, on all levels, said our demands were irrational or illegal."

Over the past two years, Fifa president Sepp Blatter has been seeking a solution to Palestinian complaints, and has explicitly stated that he wants to avoid the looming vote.

Blatter recently met with Israeli and Palestinian officials in what he called a "mission of peace", telling Palestinians that the Israelis were willing to ease movement restrictions by giving Palestinian players special ID cards and creating an escort service between Gaza and the West Bank.

Blatter also said Israel had agreed to tax exemptions on equipment donated to the Palestinians.

However, the Israelis subsequently delayed the Palestinian National Football team at Allenby Bridge as they were en route to Tunisia to prepare for upcoming matches. "If they want to avoid sanctions, the Israelis have to make concessions," Rajoub said.

Israel, meanwhile, has rejected the Palestinian bid, with IFA saying it has no jurisdiction over security issues, which are often cited by Israeli authorities as the reason for delays in the movement of players or equipment. IFA maintains that the Palestinian bid is an attempt to mix politics with sports.

However, Palestinian football officials maintain it's a sports matter. They accuse the IFA of being a "partner in crime", because it defends and justifies the Israeli violations, they argue.

Besides movement and access restrictions, Palestinians cite two violations in their plight: The fact that the IFA allows five teams based in illegal West Bank settlements to compete in the Israeli league, thus encroaching on PFA territory and breaching international law - since settlements are considered illegal as per Geneva conventions.

Palestinians also accuse IFA of not dealing properly with racist behaviour- particularly that of their top-tier club Beitar Jerusalem.

Back in Beit Ummar, Arar believes the pressure will pay off. "I don't think a vote will take place," he said, noting FIFA could avoid a vote by creating an independent committee that guarantees Palestinian players the right of movement. Although that would not address all of their complaints, "it would manage the problem".

According to Rajoub, the Israelis have been enjoying the privileges of the status quo. "We're in a corner," he said, "but we will not give up."