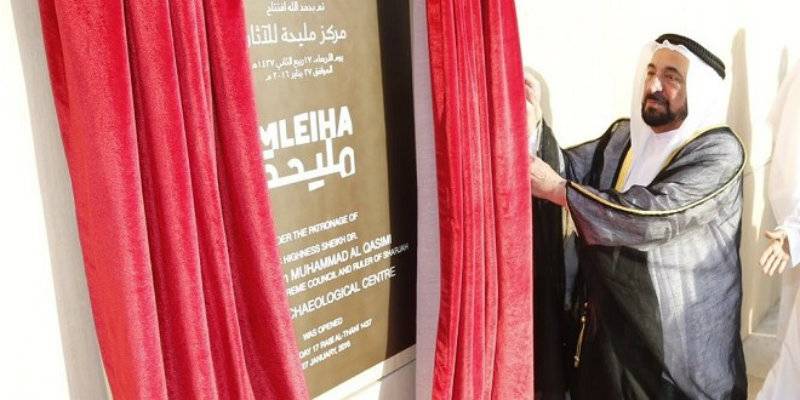 His Highness, Member of the Supreme Council and Ruler of Sharjah unveiled the discovery of inscriptions engraved on a tomb that date back to  the third  century  BC,  in the  presence  of His  Highness Sheikh Sultan bin Mohammed bin Sultan Al Qasimi, Crown Prince and Deputy Ruler of Sharjah. The historical treasure was discovered by a Belgium expedition from the Royal Museums of Art and History in Brussels, in collaboration with the team of the Directorate of Antiquities at the Sharjah Department of Culture and Information. The   recovered   treasure   features   inscriptions   engraved   on   a   huge   grave   consisting   of   an underground burial chamber measuring 5.20 square meters. The inscription, written in Aramaic and southern Arabic language, carries the name of Amad bin Jar bin Ali Kahin, the king of ancient Kingdom of Oman, and his identity and descendent.

The inscriptions also include the date when the Tomb was built. It says the tomb dates back to90 or 96 according to the Greyhound history, equivalent to the year 221/222, or 216/215 BC, making it the oldest historical discovery that refers to Oman and also proves that the ancient Kingdome of Oman existed in the late third century BC.

The announcement was made by His Highness the Ruler of Sharjah when he inaugurated the first phase of the Meliha Archaeological and Eco-tourism Project, which is one of the most important tourist and archaeological projects in the   UAE, and the largest of its kind in the Central Region of the Emirate of Sharjah. His Highness the Ruler of Sharjah, launched the Mleiha Archaeological Centre, the first phase of the project, which displays ancient relics found at Mleiha. The centre takes visitors on a tour through Mleiha’s history over three millenniums in its   separate sections. The centre will be constantly updated as new findings are uncovered through ongoing excavation work and placed on display there.