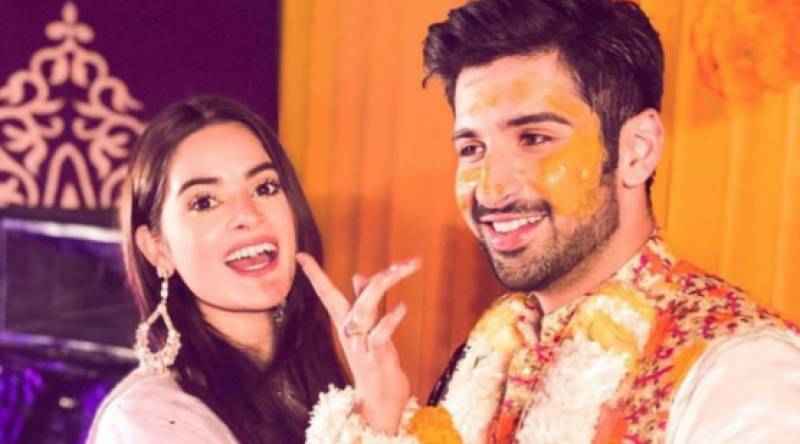 KARACHI - Recently, Pakistani Tv star Muneeb Butt shared that he cannot work with his sister-in-law Minal Khan in any drama during his guest appearance on the local TV show Har Lamha Purjosh.

When asked by host Waseem Badami, which actress he is more likely to work with if she has to replace his wife Aiman Khan in a drama, Butt said: “I can never work with Minal because people won’t be able to differentiate if it’s Aiman or Minal.” He added that it will be an awkward situation so that’s out of the question anyway.

Butt had chosen his co-star Ramsha Khan when given three options and said he would rather work with her as she’s a close friend of Aiman Khan (Muneeb Butt's wife).

Talking about why his first film’s experience wasn’t good, Butt said he took it up when he just stepped in the industry so he didn’t know what to choose.

During the show, Muneeb had also stated that his wedding which had eight functions was grand due to a reason. “It was the first wedding in Aiman’s family and last in mine, so we were really excited about it.”

LAHORE - Minal Khan and Aiman Khan just took sister goals to another level. Before Aiman tied the knot with Muneeb ...

The Koi Chand Rakh actor had also shared that he was vacationing in Europe and was disturbed to see people criticising him about ‘saying no to dowry’ as part of a campaign, something he followed himself. “I didn’t take dowry from Aiman’s parents, it’s an added burden on a girl’s family,” he said.

Pakistani stars Aiman and Muneeb's wedding took place earlier this month in the most lavish festivities, and now the ...