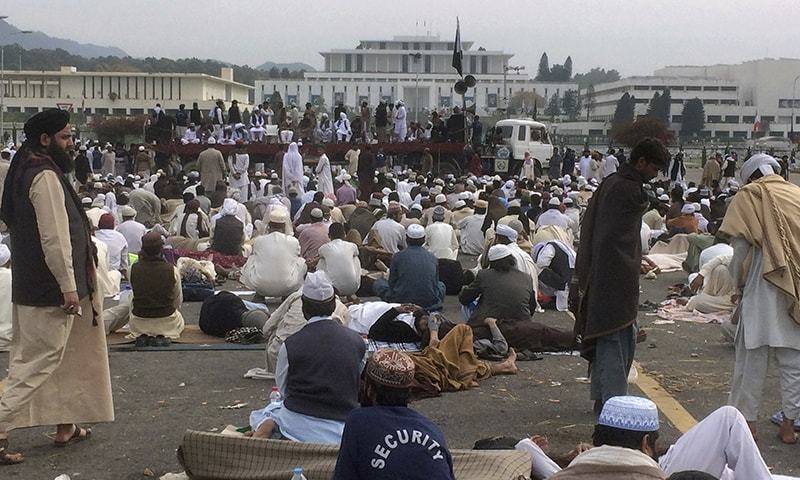 ISLAMABAD (Staff Report) - Hundreds of pro-Qadri demonstrators, who are currently holding a sit-in in front of Parliament House in Islamabad's red zone, have announced to continue protest until their all ten demands are implemented by the government.

According to a statement issued by Tehreek-e-Lab'baik Ya Rasool Allah, the demands include immediate imposition of Nizam-e-Mustafa [Islamic Shariah], execution of all convicts of blasphemy law including Asia Maseh, declaration of Mumtaz Qadri as martyr by state and removal of Ahmedis and other non-Muslims from key positions in public offices.

The protesters have also demanded the unconditional release of all those who are in jails for killing alleged blasphemers and recognition of Qadri's cell in AdialaJail as a site of national heritage and that Mumtaz Shaheed Library should be established at the location.

"Media must be ordered to call Mumtaz Qadri as martyr and not air any content that contradicts the teachings of Islam," the demands-pamphlet read.

Meanwhile Islamabad Assistant Commissioner has refused to accept any of the demonstrators' demand saying that they must leave the red zone. Any one violating the law would be arrested and treated accordingly, he said in a statement.

Thousands of stone-throwing supporters of Qadri marched towards the Parliament building. Mumtaz Qadri supporters clashed with police to mark his chehlum on Sunday evening.

Authorities have placed containers on the road to block the procession and strict action is also expected as the procession attempts to enter the buildings by force. The government has requisitioned Pakistan Army troops to control the situation in Red Zone of federal capital.