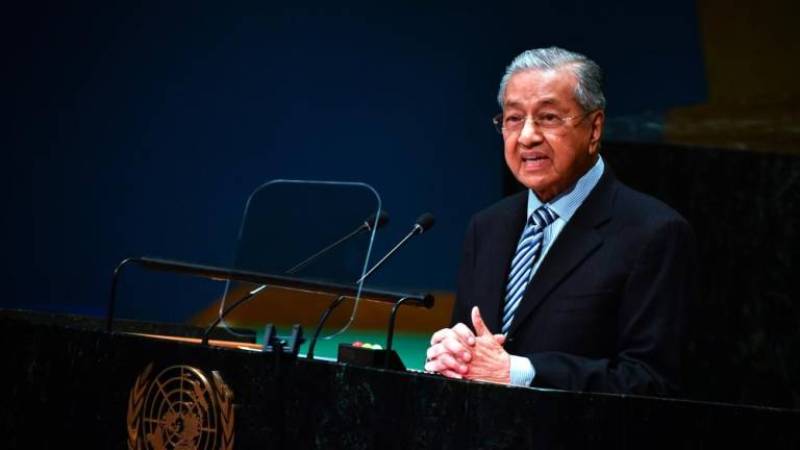 NEW YORK - Malaysian Prime Minister Mahathir Mohamad minced no words in calling out India over the atrocities being committed in occupied Kashmir.

In his speech before the United Nations General Assembly on Friday, the Malaysian leader called for settling the Kashmir dispute between India and Pakistan through "peaceful means".

The Malaysian premier regretted that despite the UN resolutions on Jammu and Kashmir, it has been 'invaded and occupied', saying there may be reasons for this action but it is still wrong.

"The problem must be solved through peaceful means," Mahathir said adding, "Ignoring the UN would lead to other forms of disregard for the UN and the rule of law.”

On the lingering question of Palestine, the Malaysian prime minister said the first action of the United Nations was the creation of the State of Israel, seizing Arab land and expelling 90 per cent of the Arab population. The result was terrorism when there was none before, or not on the present scale, he said.

Mahathir acknowledged that Malaysia accepts Israel as a fait accompli but cannot accept Jewish settlements or occupation of Jerusalem.

Muslims, he said, are accused of terror even if they did nothing, their States are destabilized by regime change.

The prime minister said there were no massive migrations in the past, but now wars and regime change force people to flee their countries.

Turning to the fate of the Rohingya people in Myanmar, he noted many colonies in the West had expelled natives from their countries, but never as brutally as in Myanmar.

The Rohingya dare not return to Myanmar because they could not trust its military, due to the helplessness of the world in stopping atrocities.

The remarks of Malaysian premier came after Pakistani Prime Minister Imran Khan stressed the United Nations to thwart the impending genocide and bloodbath in the restive valley.

‘The purpose of my trip is to reveal what is happening in Kashmir,’ said the premier adding that India illegally revoked article 370 that granted Kashmir a special autonomy, noting that the total number of India forces in the occupied valley stood at 900,000.

“We immediately returned the pilot [of the Indian jet shot down by Pakistan], saying we don’t want any escalation. Rather than taking that as a peace gesture, almost the entire campaign of Mr. Modi in the election was how we had taught Pakistan a lesson,” said the premier.

He brought up the issue of Indian Spy Kulbhushan Jadhav in his speech as a proof of India’s involvement in subversive activities in Pakistan.