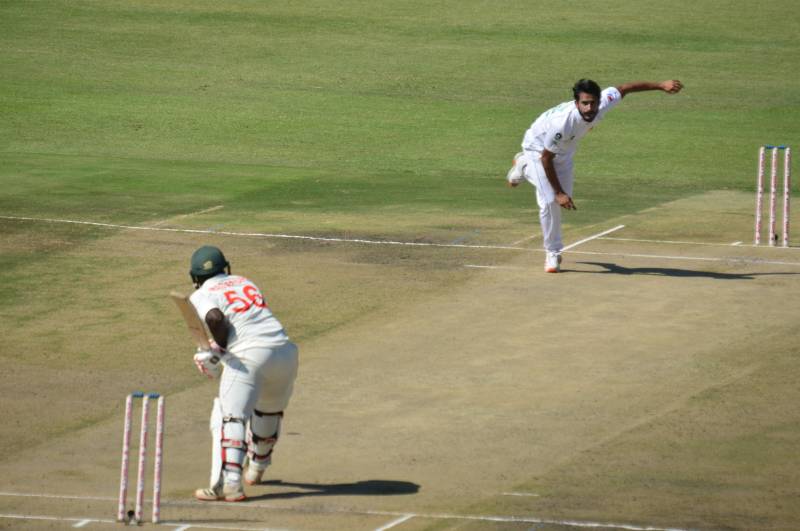 HARARE – Four-fers from pacers Hasan Ali and Shaheen Shah Afridi and an unbeaten century stand by openers Abid Ali and Imran Butt put Pakistan in a strong position against Zimbabwe at the conclusion of the first day of the first Test at the Harare Sports Club on Thursday.

The tourists were only 73 runs behind Zimbabwe and will resume their innings on Friday morning with 103 runs on board without a loss of any batsman, the PCB said in a statement.

Stumps at the Harare Sports Club!

Zimbabwe were bowled out for 176 after Brendon Taylor decided to bat after calling the toss right. Debutant Roy Kaia, who batted at six, was the only batsman to put up a notable resistance with a 94-ball 48, while the next best score came from Donald Tiripano as he made 28 not out.

Zimbabwe lost their first wicket without any runs on board as Kevin Kasuza chopped on a Hasan Ali delivery onto the stumps on the penultimate ball of the second over.

Shaheen struck next as he induced an edge off Prince Masvaure in the ninth over after hurling down beautiful out-swinging deliveries across his opening spell.

Troubles for the hosts compounded as they lost Tarisai Musakanda and Taylor next – the two batsmen dismissed by left-arm orthodox Nauman Ali and Hasan, respectively – with the scorecard reading a paltry 30 for four.

A 59-run stand between Milton Shumba (27) and Kaia breathed hope for Zimbabwe recovery, but the former’s run out squashed it.

The final nail in the coffin came in the shape of Kaia’s blow when Hasan set him up brilliantly with short-pitched deliveries and followed them up with a scorching yorker that pinned the batsman on the popping crease.

In his next over, he brought Regis Chakabva forward and had him edge a length delivery into the hands of Imran, stationed at slip cordon. Following the dismissal, Shaheen came to the party and rolled over the tail and reached the milestone of 50 Test wickets.

Zimbabwe bowlers was struck runs at almost three and a half runs an over when they took the field in the evening session.

Abid Ali scored his second Test half-century as ended the day with 56 runs next to his name. The right-handed 33-year-old batsman smashed 10 fours after getting off the mark on his 14th delivery.

He was duly supported by Imran Butt, who is playing his third Test after making his debut against South Africa earlier in the year at the back of a brilliant run in the first-class cricket. He was only seven runs short of his maiden half-century when the stumps were called and as such, he had posted his best score in the format with 43 not out.

Shaheens and the Chevrons are facing each other in the longest format of cricket after eight long years. The last encounter between the two sides in the Test format was held in 2013 at the same venue.

Pakistan took on Zimbabwe without key leg-spinner Yasir Shah today. Pakistan has leg-spinner Zahid Mahmood and off-spinner Sajid Khan to chose from, who both have not played a Test yet.

Pakistani captain is expecting to give best in test series. Skipper Babar Azam while speaking in a virtual talk mentioned that, ‘The Harare pitch prepared for the first Test gives a better look. There is a bit of grass on the surface and even the pitch looks firm and suitable for Test cricket. Let’s see how it will behave during the Test.’

Meanwhile, the hosts have named a young squad for the two-match series against Pakistan with the inclusion of five uncapped players. Luke Jongwe, Richard Ngarava, Roy Kaia, Milton Shumba, and Tanaka Chivanga have all earned their maiden Test call-ups.

HARARE – Pakistan beat Zimbabwe by 24 runs in the third T20I match at Harare Sports Club on Sunday, winning the ...