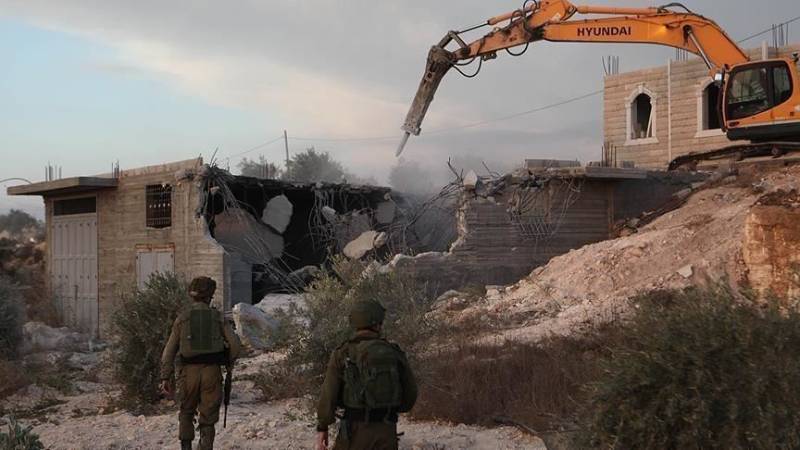 UNITED NATIONS – Israeli authorities have demolished and seized over six hundred Palestinian structures in the occupied West Bank since January as part of Israel’s continuous occupation and aggressive land-grab policies, according to a new UN report.

The report, entitled “Protection of Civilians”, from the United Nations Office for the Coordination of Humanitarian Affairs (OCHA) said that 617 structures have been demolished or seized so far this year, displacing 898 Palestinians.

It noted that the figures represent a 35 and 92 percent increase respectively, compared with the same period in 2018.

Under the accord, the Israeli army has full control over the management of resources, planning and construction in the West Bank’s Area C, and strictly limits Palestinian construction or development to less than one percent of the area.

The territory accounts for more than 60 percent of the occupied West Bank, and would form a significant part of a future Palestine state under the two-state solution.

The OCHA further highlighted that Israeli forces uprooted or chopped down about 2,500 trees and saplings during a demolition operation in a shooting area east of Nablus, and that the trees were part of a recreational area that served about 14,000 residents of Beit Furik town and nearby Khirbat Tana village.

The report went on to say that Israeli authorities have demolished 29 Palestinian buildings or forced their owners to demolish them in Area C and occupied Jerusalem al-Quds during the past two weeks, under the pretext that they have been constructed without proper permits. The demolitions led to the displacement of 45 Palestinians and incurred losses on more than 100 others.

The UN says Israel has advanced or approved plans for over 22,000 housing units in the occupied West Bank.

According to the report, Israeli settlers injured four Palestinians and damaged about 330 olive trees and seven vehicles during eight attacks in the West Bank over the past two weeks.

Elsewhere in the Gaza Strip, the OCHA pointed out Israeli military forces injured a total of 129 Palestinians, including 44 children, during the “Great March of Return” rallies.

The monthly economic loss for the Gaza Strip due to the Israeli blockade stands at nearly $100 million.

The OCHA reported that Israeli soldiers shot and killed an 18-year-old Palestinian east of Khan Yunis on December 17 as he approached the border fence. His body is currently being held by Israeli officials.

On at least 15 occasions, Israeli forces opened fire in areas bordering the border fence with intent to impose access restrictions, and conducted an incursion and bulldozing operation near the fence. Four Palestinians, including three children, were arrested near the border fence in two separate incidents.