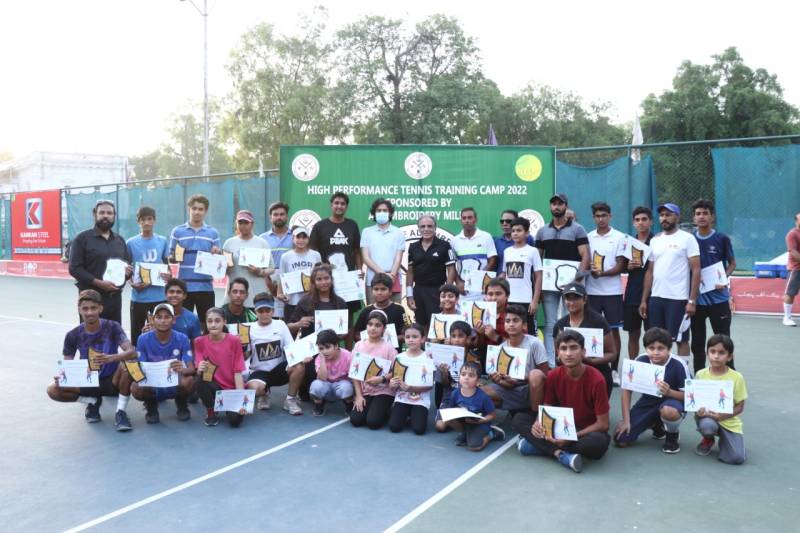 The camp was sponsored by Ali Embroidery Mills and was conducted by Punjab Lawn Tennis Association in collaboration with Sports Board Punjab.

Speaking on the occasion, Rashid Malik especially thanked Mr. Tariq Zaman of Ali Embroidery Mills and hoped that he would continue to support tennis especially for the development of junior tennis. He also thanked the players and their families, who participated in the tennis camp saying, “The camp will play an important role in their tennis careers and when they will represent their country in international events, this training will help them produce better results.”

Talking to the journalists, longest serving Pakistan No. 1 Aqeel Khan said that he and all the other coaches, who made this tennis camp a success, are grateful to PLTA and its Secretary General Rashid Malik for taking this historical step, which will benefit the young tennis players in the long run. “This camp will prove very useful for future tennis players and their careers. Whenever they will represent the country at international circuit, they will find themselves better and improved players and hopefully, they will try to give better results for Pakistan.

“PLTA Secretary and coach Rashid Malik and his entire team deserves due credit for conducting this first-ever High Performance Tennis Training Camp in a trend-setting manner. The way they provided us all the necessary facilities and superb support, it is really commendable. I hope that the PLTA and the Pakistan Tennis Federation (PTF) will continue this great initiative and conduct such High Performance Tennis Camps at least once or twice a year,” Aqeel concluded.