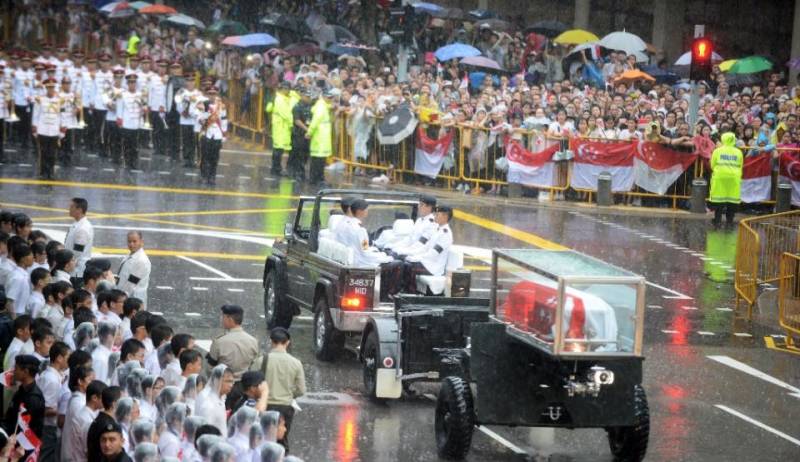 SINGAPORE (APP) - More than 100,000 people lined Singapore's streets to bid farewell to its founding father Lee Kuan Yew on Sunday, officials said as a week of mourning ended in the city-state he led to prosperity.

Torrential rain soaked the crowds as howitzers fired a 21-gun salute to the country's first prime minister and jet fighters screamed across the sky in a grand farewell normally reserved for a head of state.

"The light that has guided us all these years has been extinguished," his son, Prime Minister Lee Hsien Loong, told a state funeral attended by 2,200 people including Asia-Pacific leaders at the National University of Singapore.

Lee's coffin, draped in the red-and-white national flag and protected by a glass case atop a two-wheeled gun carriage, was taken in a procession from parliament to the university with close to 2,000 police officers ensuring security.

Officials said 454,687 people -- in a nation with just 3.34 million citizens -- had paid their last respects to Lee, 91, before his wake ended in parliament on Saturday.

Four air force F-16 jets staged a fly-past as the cortege made its way through a square where Lee was first sworn in as prime minister in 1959.

He kept the position for 31 years, ruling with an iron fist to transform Singapore from a sleepy British colonial outpost into a gleaming metropolis that now enjoys one of the world's highest standards of living.

Singapore became a republic in 1965 after a brief and stormy union with Malaysia.

Lee died less than five months before the island celebrates its 50th anniversary as a nation on August 9.