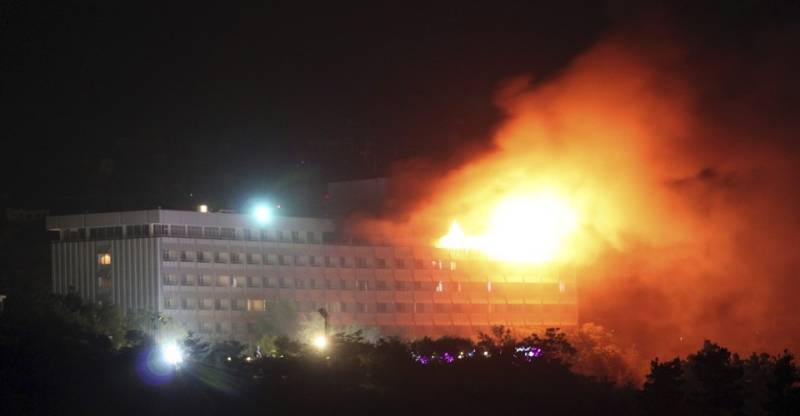 KABUL - Gunmen stormed the Intercontinental Hotel in Kabul at the start of an 11-hour siege that continued into Sunday morning, leaving at least five Afghan civilians dead, officials said.

Six other civilians were reported wounded and more than 100 people, including 16 foreigners, have been rescued from the hotel, said Interior Ministry spokesman Najib Danish.

The bodies of four attackers were recovered as security forces continued to clear the landmark building.

Attackers had taken several hostages in the hotel, according to local Tolo News agency who cited Kabul police.

The Intercontinental Hotel is located on a hilltop in Bagh-e Bala area of the city and is heavily guarded because it hosts both Afghan and foreign guests as well as official conferences. It was last attacked by Taliban insurgents in 2011. Twenty-one people were killed including nine attackers.

The Ministry of Foreign Affair, in a statement issued on Sunday, stated: “Pakistan strongly condemns the brutal terrorist attack at the Inter-Continental Hotel in Kabul. We express deep grief and sorrow at the loss of precious human lives and the injuring of many others in this terrorist act.”

“The government and the people of Pakistan convey solidarity and support with the government and people of Afghanistan at this dastardly terrorist attack. We convey our deepest sympathies for those who have lost their loved ones and our sincere prayers and wishes are for early recovery of those who have sustained injuries in this heinous terror attack,” read the statement further.

“We reiterate our strong condemnation of terrorism in all its forms and manifestations. In our view, cooperation among the states is important for effectively combating and eliminating the scourge of terrorism,” the statement concluded.