‘Pirates’ may rule Iceland in next election 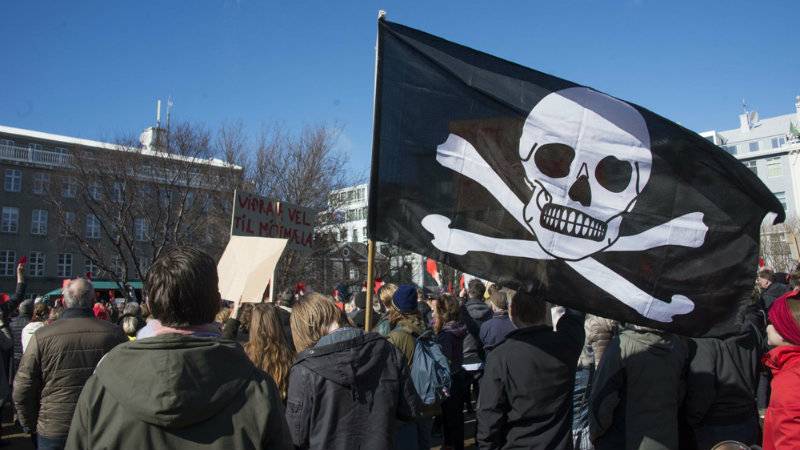 REYKJAVIK - Iceland may soon be the first modern country ruled by political pirates bent on rooting out corruption and transforming society through direct democracy.

The Pirate Party of Iceland, vowing to root out government corruption and bring radical change, is projected to win upcoming election.

Their brand of politics is hacktivism meets revolution. Dominated by young people, the Pirates have grown from their founding in 2006 as a small Swedish movement battling restrictive copyright law into a quasi-mainstream political force.

While the Pirate Party in Sweden, and Pirate Parties around Europe, have struggled, the Pirate Party in Iceland has surged to the top of the election polls, from a mere five percent a few years ago, to 38 percent in February. With three members of parliament elected in 2013, they were the first Pirates in a national parliament anywhere in the world.

Currently with a projected 22 percent of the vote - just ahead of the incumbent Independence Party - they may well win the election when Icelanders go to the polls to vote for members of the Althing, Iceland's parliament, on Saturday, the Aljazeera reported.

The Pirates embrace their place as current front-runners in a worldwide movement against government corruption. From the Arab Spring to Occupy Wall Street to Podemos in Spain to the Five Star Movement in Italy, to the recent Bernie Sanders campaign in the United States, cries for real change, accountability and direct democracy are resonating widely across the political spectrum.

Following the financial meltdown of Iceland's banking system in 2008, Iceland shot back onto the world stage in 2016 with the release of the Panama Papers.

Sigmundur Davio Gunnlaugsson, then the prime minister of Iceland and once regarded as a world leader in the fight against bank bailouts, was forced to resign earlier this year when it was revealed he was keeping a large, personal, undisclosed account in an offshore tax haven.

"Right now there is very little trust in the economy and the government and its institutions," says Smari McCarthy, a candidate for the Pirate Party in the southern constituency of Iceland.

In 2011, the country came together through a democratic and inclusive process to draft a new constitution. Iceland had been living with a constitution handed down by Denmark after it achieved independence in 1944.

The Pirates don't follow the classic notion of left versus right politics. They represent a new type of political ideology - one based on transparency, direct democracy, and empowerment of the individual.

Some critics point to this approach as evidence that the Pirates don't have clearly defined policy positions, and therefore won't succeed in managing the government. But the Pirates maintain that it is up to people to decide what they want. The structure of direct involvement in decision-making, and having open access to information, is what they believe to be most important.

Aljazeera says most Pirates are self-proclaimed nerds, and proud of it. Having grown up with the freedom of the internet, the access to information, and the community it provides, they are equally concerned with online and offline legislation.

Some Pirates even say their goal is to get rid of representative democracy entirely in favor of direct democracy. This may be a step too far for a country known for having the oldest parliament dating back to 930 CE. But most Pirates running for office strike a balance between revolutionary idealism and the practical nature of governing.

In an unprecedented move in Icelandic politics, the Pirates announced earlier this week they were in talks to form a coalition government with three of the other parties. It is part of the Pirate effort at transparency, letting the voters know in advance exactly how they would form a government - and a high-stakes gamble. How the public will respond won't be known until Sunday.

Whether the Pirates take control of the Icelandic parliament at the end of October or claim a significant number of new seats, for Birgitta, it is all part of a ongoing process.

This article was originally published at Aljazeera