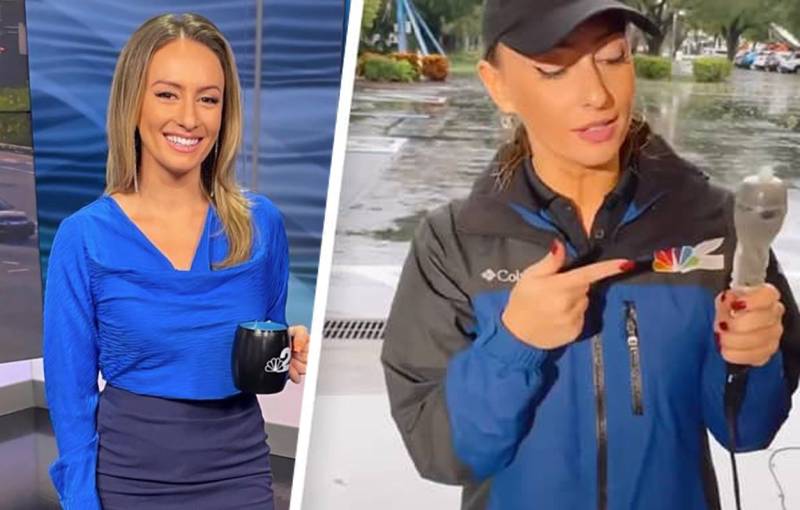 TALLAHASSEE – A correspondent of a news channel garnered attention worldwide as she put a condom on her microphone during live updates amid Hurricane Ian – which is said to be one of the most powerful hurricanes ever to strike Florida.

As the global media reported on Category 4 storm, which unleash life-threatening coastal flooding and heavy downpour, the award-winning journalist Kyla Galer distracted some viewers by reporting with a mic covered in a flexible latex sleeve.

As news organisations were questioned for sending correspondents to report Hurricane Ian, NBC2’s reporter used a different kind of protection to save the microphone.

She however took to social media to clear the air after her clips went viral on social media creating a frenzy with users coming up with hilarious memes.

In an Instagram story, she can be heard saying “It is what you think it is…It’s a condom…It helps protect the gear…We can’t get these mics wet as there’s a lot of wind, a lot of rain. So, we gotta do what we gotta do, and that is: put a condom on the microphone.”

Kyla as responded to the matter and try to explain the move, many people quipped saying ‘safe hurricane reporting’.

HARARE - Zimbabwe's health minister has said the condoms manufactured by China are too small for their citizens. ...

On the other hand, Hurricane Ian, a Category 4 storm made landfall in the southeasternmost areas in the US. Winds were recorded at around 150 mph while nearly 2 million customers were without power in the state, and the west coast issued mandatory curfews in the region.