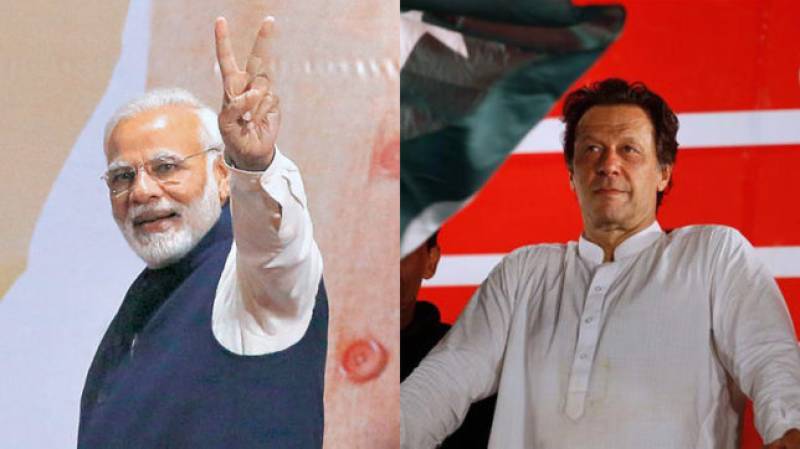 ISLAMABAD - Prime Minister Narendra Modi on Monday spoke to Imran Khan, Chairperson of Pakistan Tehreek-e-Insaf Party, and congratulated him for his party emerging as the largest party in the National Assembly of Pakistan in the recently conducted general elections, an official statement said.

"We are ready to enter a new era of relations with Pakistan," Modi was quoted as saying by the PTI press release.

PM Modi also reiterated his vision of peace and development in the entire neighbourhood.

According to the PTI statement, Khan thanked the Indian prime minister for his good wishes.

"The solution to conflicts should be found through dialogue," he was quoted as telling Modi.

"Instead of answers to conflicts, wars and bloodbath give birth to tragedies," the PTI chief said, according to the press release.

Khan said the two governments should devise a joint plan of action to free people of both countries from the cruel trap of poverty.

India on Saturday said it “welcomed” the verdict in Pakistan’s national elections, hoping that the new government in the neighbouring country will work towards prosperity and peace.

“We welcome that the people of Pakistan have reposed their faith in democracy through general elections,” an external affairs ministry spokesperson said in a statement.

Imran Khan’s Pakistan Tehreek-e-Insaf (PTI) emerged as the single largest party in the general elections, winning 116 National Assembly seats out of the contested 270 parliamentary constituencies, according to the election commission’s final results. PTI is short of the 137 needed for a simple majority.

“India desires a prosperous and progressive Pakistan at peace with its neighbours. We hope that the new government of Pakistan will work constructively to build a safe, stable, secure and developed South Asia free of terror and violence,” the statement said.

Khan, a vocal critic of the US, has said he would fix governance issues and Pakistan’s ailing economy, reset relations with US and work for peace with India.

“I really want to fix our ties, you take one step forward, we will take two,” Khan had said in a televised victory speech in Islamabad on Thursday. In that speech, he had also singled out occupied Kashmir as a “hurdle” in relations.  He offered to take “two steps if India takes one”, stating that the issue should be resolved on the negotiating table.

“I want to tell Prime Minister Narendra Modi that a new government is forming in Pakistan. He (Imran Khan) has offered India the hand of friendship. He has talked about dialogue and you should respond positively to that,” the former chief minister said in her address on the 19th raising day of the PDP in Srinagar.

The PDP president said the upcoming elections should not stop Modi from trying to establish peace with Pakistan. “Elections keep on coming. You may remember how (Atal Bihari) Vajpayeeji had offered his hand of friendship to Pakistan before the 2004 elections, and announced ceasefire on the borders. That is the magnanimity of a leader. A big leader does not think about elections, he thinks about the people,” she added.

Mufti said Jammu and Kashmir has always been a challenge for prime ministers of the country, be it Jawaharlal Nehru, Indira Gandhi, Rajiv Gandhi, VP Singh, IK Gujral, Vajpayee or Narendra Modi.

“The name of the prime minister who finds a solution to the Kashmir issue within the ambit of humanity and stops bloodshed here while improving relations with Pakistan will be etched in history in golden letters. My request is that he (Modi) use this occasion and respond positively to the initiative of friendship from Imran Khan,” she said.

ISLAMABAD - Chinese Ambassador to Pakistan Yao Jing met Imran Khan, who will assume the charge of Prime Minister on 11 ...