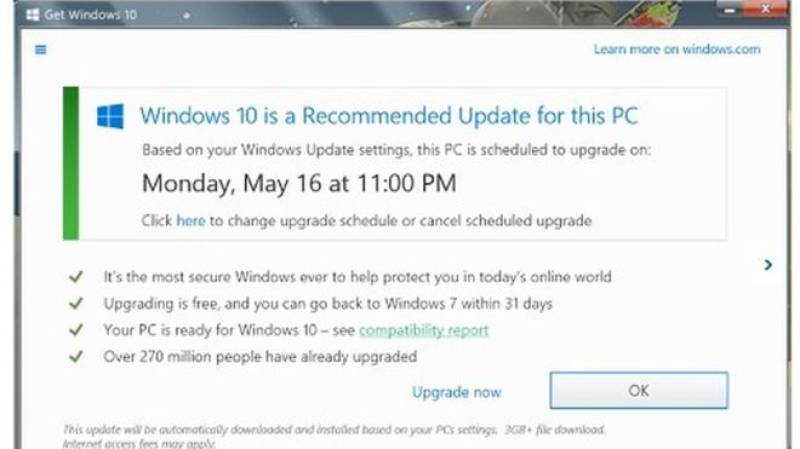 BEIJING (Web Desk) - Microsoft is facing backlash from Chinese users who have been angered by the company's efforts at persuading people to register for the free Windows 10 upgrade, an offer scheduled to end on July 26.

The complaints come on the back of the severe criticism of IT experts, who said last week that Microsoft was playing a "dirty trick" on users by not respecting their right to install  whatever they wished on their computers.

Microsoft had previously faced widespread criticism about changes it made to the pop-up box that regularly appears to obtain registrations from users for the Windows 10 upgrade.

The pop-up was allegedly changed by Microsoft so that closing it by clicking on the "x" in its top- right corner was taken as permission for the scheduled upgrade to start. Typically, clicking an "x" stops a pop-up taking any further action.

"The company has abused its dominant market position and broken the market order for fair play,"  said Zhao Zhanling, a legal adviser for the Internet Society of China told the official Xinhua news agency.

One Chinese man, Yang Shuo, who works at a Beijing-based PR firm, said the Windows 10 update interrupted him while he was working on a business plan. This meant he had to abandon the document which led to the cancellation of a meeting about a deal worth 3m yuan (£312,000).

Over 1.2 million users have taken to Chinese microblogging website Weibo so far to complain about Microsoft and Windows 10, reported the BBC.

The outcry has forced Microsoft to issue an update giving people another chance to cancel the Windows 10 installation and revert back to older versions of the company's patented operating system, either Windows 7 or Windows 8.

Around 300 million devices have been updated to run the new system, according to figures from Microsoft.