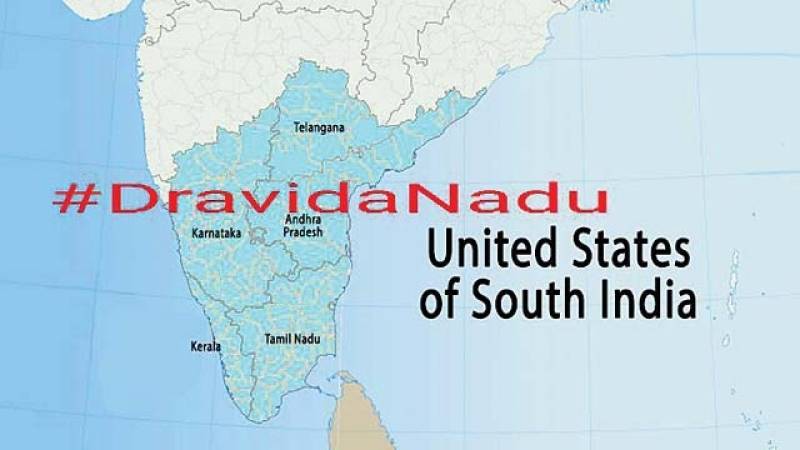 A trending hashtag, #Dravidanadu, on Twitter has caused fear and paranoia in India as the old rebellion has been revived again in India's southern states where interstate and intra-state grievances remain unresolved.

Comrade Nambiar, a Keralite who describes himself as a Marxist, seems to be tweeting from Dubai.

The hashtag was a response to the new cattle trade rules that the Union environment and forests ministry notified on May 25. Kerala was the first state to oppose the rules, which ban the sale of cattle in markets for slaughter. Chief Minister Pinayari Vijayan said his government will not implement the rules and warned the Centre against interfering with the dietary practices of Keralites.

"Undoubtedly, Narendra Modi is the most powerful Prime Minister of India. He even converted a forgotten and Tamil Nadu -centric #DravidaNadu demand alive and South Indian one," tweeted Aazhi Senthil Nathan, a political analyst. He expressed surprise at such a demand coming from Kerala, a state ruled by Congress and Left parties for long.

"#DravidaNadu trending is just a start. High alert to BJP for discrimination the religious thoughts and imposing Hindutva beliefs in South India," tweeted DMK MLA J Anbazhagan. Congress spokesperson Jothimani wrote, "This is what happens Mr Modi, when your government imposes stupid ideas on us. We will never let you destroy our rights and identity."

Congress leader and former minister of state Shashi Tharoor asked Twitterati to desist from expressing 'anti-national ideas'. "Even though that is true, I implore my fellow Southerners not to express an anti-national idea like promoting #DravidaNadu. Let's improve India," he appealed on Twitter.

Even though that is true, I implore my fellow Southerners not to express anti-national ideas like promoting #dravidanadu. Let's improveIndia https://t.co/SgYrB1by5b

BJP's Tamil Nadu unit president Tamilisai Soundararajan said the demand for Dravida Nadu is nothing but a secessionist one. "Tamil Nadu youths should not fall prey to such demands," she said.