Peace education at schools: the only way forward 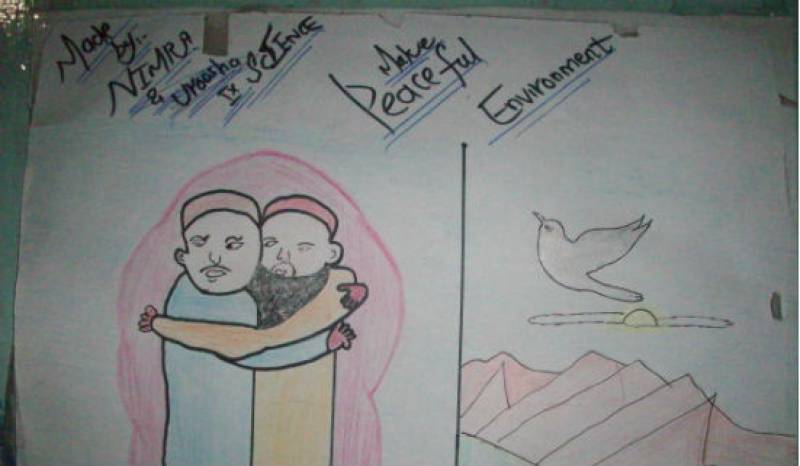 School is the only avenue leading to peace but the outdated syllabi, orthodox teaching methodologies and inappropriate learning environment are too strong in Pakistan leaving minimal chances of transformation. Our education system primarily focuses on academic learning which is meant to attain higher grades in examination. Peace education is least important for the policymakers as well as researchers since few have worked in this domain.

More than ever rising interest of highly educated people in the terrorist organizations and activities is a result of lack of interest shown by our governments, civil society and parents. Devastatingly, use of power remains the answer to violent and non-violent extremism in the land of pure, even today.

“Peace cannot be kept by force; it can only be achieved by understanding” Albert Einstein’s words say it all. This is only due to the lack of understanding that humankind is always at war.

Predominantly, almost all of the Muslim states are facing the sectarian conflicts. Likewise, Pakistan is the worst affected country where sectarian prejudices exist at the optimal level. Adding to the jeopardy is the absence of efforts and intent to eradicate the prevalent sectarian radicalization leading to violent extremism in the country. Regrettably, not even a single book taught at schools contains a unit, a passage or even a single sentence promoting the idea that a Muslim is a Muslim notwithstanding what sects he comes from. A battle of labeling the others as Kafirs (non-believers) is going on in Pakistan. Fragility and sensitiveness of adding texts promoting co-existence at a sectarian level are prodigious, but there is no other path except educating our children appropriately.

Ansarul Sharia Pakistan, a proscribed organization, not only consisted of highly educated members but it was founded by university graduates. Similarly, Tehreek-e-Taliban Pakistan, Lashkar-e-Jhangvi, Al-Qaeda also had well-educated members.

A curriculum promoting peace education instills discipline. It inculcates different ways to avert the social ills of violent and non-violent extremism at a very early age. Fundamental rights of an individual, co-existence, inter-cultural and inter-religious faith and harmony and above all conflict resolution skills should be the indispensable parts of peace education curriculum.

Inseminating peace into the learners using prevalent subjects, such as Geography, Pakistan Studies, Islamiyat and, Urdu, English and Social Studies, is possible. Curriculum reformation is required only.

The education minister, Mr. Shafqat Mehood, pointed to the need of standardization of education the other day. Which vividly depicts that he is on the wrong path since instead of standardizing the education; he should transform it to cope with the dangers posed by violent and non-violent extremism along with enrolment and quality issues prevalent throughout the country.

The true purpose of learning is to further the emotional and intellectual development not rote learning the texts that were memorized even by students more than three decades ago.

Conflict Resolution skills should be developed at schools through curriculum, teaching, discipline and overall environment.

Presence of disturbance and disequilibrium within mankind, at the social level and global level, will only vanish if our youth is taught conflict-resolving skills. Students’ right to learning ways of abstaining from violence must not be compromised. It’s a shame that education is not meant to develop peace and harmony.

Teachers’ role in imparting peace education is vital since they are the ones who even in the absence of peace curriculum and environment play an effective role as a moderator and conciliator worldwide. Teachers must be trained to make students responsible and creative. Pupils must be able to develop values and attitudes like cooperation, solidarity and autonomy at school. Teaching how to understand conflicts and similarities amongst fellow students is essential. Children must put themselves in other’s shoes prior to judging fellow being’s actions.

Dialogue plays a pivotal role in conflict resolution hence youth must be taught to adopt conflict resolution methods which are non-violent manner and do not harm the dignity of both the parties. Interactive, cooperative, problem-solving teaching methodologies should be promoted in the classroom.

Particularly, in the land of pure, education has become a race, a competition in which every student is taught to defeat the rest. For instance, most of the Pakistani school have more than 50 kids in a classroom where both teachers and learners are busy writing Teachers have no time since they enter the classroom and start writing on the whiteboard while students keep copying the teacher all the time. Their sole aim is to obtain an A grade in exam since it’s a matter of survival for the teacher and on the other hand, children are trained to strive hard to stay ahead of the rest. Schools are the only place where kids can learn social skills that help them live in harmony with others without hurting their own personality.

War is a menace, Give peace a chance

Curbing radicalism and violence through education