It was not Malala who visited Pakistan this week 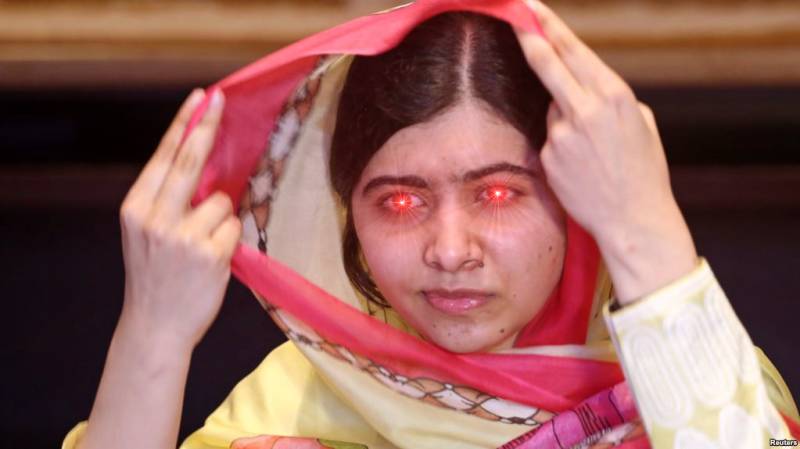 I have a great good news for Malala-Haters: It was not her who visited Pakistan this week. It was Government of Pakistan’s advance April Fool prank on you, and you fell for it.

So take it easy, and do not burn yourself more than you already have till reading this expose. This interim government, not having anything better to do, and not being able to play a prank on the CJP or the COAS, decided to hoodwink you all silly folks, and did very successfully.

It was not Malala who reportedly came, apparently visited the PM, spoke in Urdu and Pashto but cried in English. It wasn’t what you all have been made to see and believe. It was simulated reality, and the government played a trilemma on your dilemma.

To understand this simulation reality, allow me to share with you a bit of a less known fact that tells us what many of us already new – that this world is not real, and the real world is – well that’s where we and they diverge a bit; we call it the hereafter and they call it ‘the future’ - where our technologically superior descendants have created simulation of their memories.

If this sounds poetic, or prophetic, its neither. Its pure science.

Malala is so innocent and naïve, and so honest and candid that she repeatedly dropped several big hints in her speech. When she said ‘I dreamt’ of visiting Pakistan; I don’t ‘believe’ its actually happening; and that ‘I felt as if I were in Karachi when driving in New York’, what else she was trying to tell you if not that this visit too was a dream!

But you still didn’t decode the fantasia of visit, took it for real, and opted to suffer and burn believing she actually was in Pakistan! The problem is that we believers don’t like to think.

You should now thank your stars that someone is saving you from further reeling in anger and burning yourself to ashes, which is such a Hindu thing to do and so unbecoming of Muslims.

So please stop burning forthwith, and let the Malala fans seethe in their false happiness.

Back to the simulation theory, which many fake scientists like to term ‘hypothesis’, it says that we are living in a computer simulation, and we are not what we think and feel and say we are. This theory seems to have taken deep influence from Sufi Islam.

Whether there is any correlation between the two or not, there are a few strong parallels. Out of over 7 billion people, almost 6 billion don’t believe in Islam (yes, they are the losers, not us). Similarly, in the scientists’ comity, almost as many don’t subscribe to the simulation theory, as if this too is religion. For us, only this parallel should suffice to prove it is right.

Now, lets do a bit of a flashback. When we all said and believed that she was never shot in the head, it was all drama and foreign ploy to defame Pakistan.

There was no surgery, and she was taken to UK to get another plastic surgery that could prove ex post facto that she was actually shot.

The person who admitted having shot her confessed under duress, and two other girls who got hit by stray bullets were scratched by the sound of gunshot. But Malala never was shot at.

This theory says we are put in a very sophisticated computer simulation, where we are made to revel in a deep ignorance; and our pleasures, pains and knowledge are fake and false.

Even if this hypothesis is wrong, and Malala actually came (rest assured she never did), so what!

Just like, in the dark forest of ignorance, its not a big deal to call a flower a thorn, its no big deal if she came. Her leaving after four days is in itself a proof that she never came.

In computerised simulation, if a thing doesn’t make sense, there can be a bug in the computer.

Since her trip was a simulated prank, you can return the prank by continuing with this pure and euphoric sizzle of hatred for her and all those who said, Welcome home Malala! But, remember, just sizzle, don’t burn yourself to ashes …