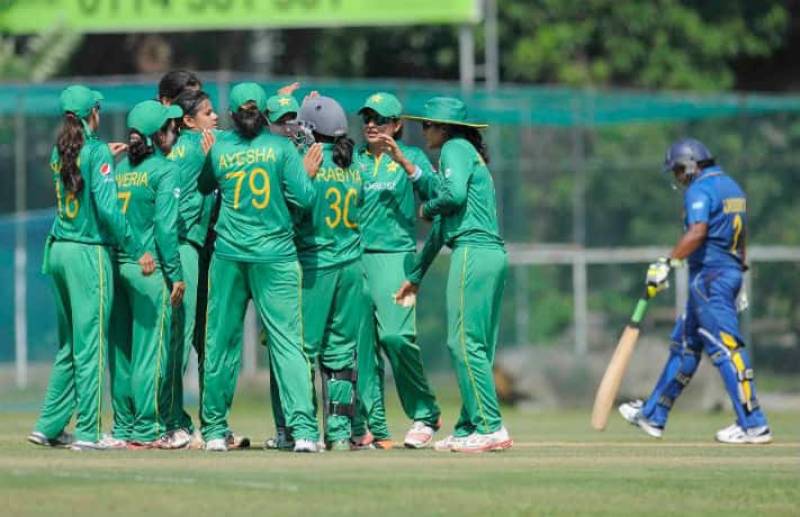 COLOMBO - After recording a clean-sweep in the ODI series, Pakistan Women on Saturday defeated Sri Lanka by 38 runs in the third and final T20I at the Colombo’s Sinhalese Sports Club, sealing the series 2-1.

After Sri Lanka won the toss and elected to bowl first, Pakistan were able to post 113-6 driven by run-a-ball 38 by in-form Javeria Khan. It started steadily enough for Pakistan, with Sidra Ameen and Nahida Khan putting up 33 for the first wicket. It took them seven overs to score the runs before Nahida became the first to fall, to Sugandika Kumari, for a 23-ball 19.

Chasing a modest target of 114, the Sri Lankan team could muster just 75-8 as Pakistan skipper Bismah Maroof took two wickets for 14 runs, whereas Sana Mir and Diana Baig claimed a scalp each; the rest of the dismissals were all run outs.

The series victory was supplemented by some standout performances from the Pakistan side. Javeria Khan was the top scorer for Pakistan with 93 runs in three matches, while Diana Baig was the top wicket-taker.

On March 28, a record-breaking fifty by Javeria Khan helped Pakistan Women clinch a thrilling win in the first T20 international against Sri Lanka Women in Colombo.

Pakistan had chased down Sri Lanka’s total of 129 to register their highest chase in the shortest format of the game. Javeria Khan smashed the fastest T20I fifty by a Pakistani woman, scoring 52 off 36 balls to dominate the chase. She was helped along by skipper Bismah Maroof, who put up a brisk 42 off 31 balls.

With their 2-1 win in the 20-over series, Pakistan concluded their tour of Sri Lanka.