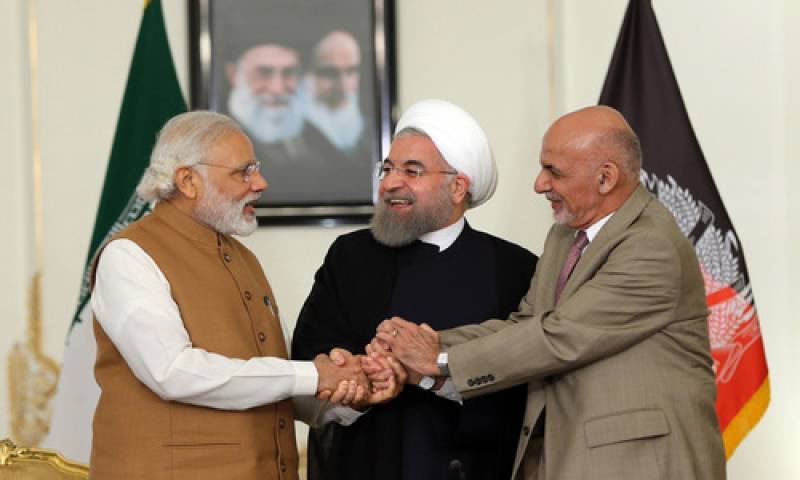 Afghan President Ashraf Ghani’s decree banning the entry of Pakistani trucks to Afghanistan comes as no surprise. There is a method in this meanness.

It is consistent and calculated.

Adding the exports of Kazakhstan and Uzbekistan ($ 621 million and 399 million respectively) to Afghanistan, Kabul imports more than 60% of its total importable from just five neighboring nations. India is nowhere – yes, it needs emphasis – India is nowhere when it comes to top five exporters to Afghanistan.

As far as Afghan exports are concerned, almost half – 47% to be exact – are absorbed in Pakistan. Here, India comes second – with the absorption of around 40% of Afghanistan’s total exports.  In absolute figures, Pakistan is importing goods worth $ 283 million and India is importing those of $ 230 million from Afghanistan.

What does it mean? It means that despite a consistent decrease in Pakistan’s exports to Afghanistan that crossed the $ 2 billion mark in 2012-13, and numbers of around $ 1.5 billion over the past three fiscal years, Pakistan remains the single largest trading partner of Afghanistan. Pakistan is not only an exporter, but it is also the single largest buyer, of what is produced in Afghanistan.

And that is the bad news, which is understandably quite pinching, for Mr. Ghani – the ‘theorist in chief’ of the war-torn nation as well as his international mentors.

India, as a matter of fact, is nowhere in the top eight trading partners of Afghanistan.

Afghanistan’s Ministry of Commerce and Industries does not have any foreign trade policy, per se. One thing is important to note here: the USAID is working on a program to help the Afghan government develop a ‘modern policy framework’ for international trade which takes into account Afghanistan’s integration into the world economy, and meets the country’s commitments as part of the membership of World Trade Organization (WTO) that Kabul attained in July 2016.

The Ministry of Commerce and Industries puts its vision and targets in the following words:

The current policy focus of the Afghan government, supported by international donors such as USAID, is on the production of more fruits, dry fruits, spices, and vegetables, which make up the main exportable items of the country along with carpets.

But what Ghani and his team have been doing consistently over the past three years of the National Unity Government (NUG) has been to look for ways and means that enhance their country’s trade with India, particularly, and Iran in addition to other neighbors.

Exactly one year ago, in October 2016, Afghanistan hiked the entry tax for Pakistan trucks by 100%, effectively doubling it, making Pakistani exports considerably costlier.

In recent months, the signing of India-Iran-Afghanistan trilateral transit agreement – which has been operationalized with the shipment of Indian wheat as a ‘gift’ to Afghanistan – through the Chabahar port of Iran. Remember, wheat and wheat flour is one of the main Pakistan exports to Afghanistan. Hence, the ‘gift’.

Ashraf Ghani’s government has also dragged its feet on renewing the transit agreement with Pakistan – an arrangement that Afghanis have depended upon for decades – and has gradually shifted its trade to Iranian ports. India has also come up with an ‘air corridor.’

But that is not all.

Ironically, the most striking part of it is that Ghani was threatening – and now has implemented this threat – to block Pakistani access to Central Asia via Afghanistan. The argument by Ghani and his team is that as Pakistan does not allow Afghan trucks to cross into India and bring Indian goods via land route, the Afghans were perfectly entitled to do the same. What Afghan authorities, including the president himself, are conveniently ignoring is the fact that there is a sea of difference in the nature of relations between Pakistan and India on one hand, and Afghanistan and Central Asian states on the other! Which sane person would try to draw a parallel between the two situations?

Ashraf Ghani had recently announced that he wants to see his country as an ‘exporter nation’ and he vowed to take Afghanistan’s trade with India alone to $ 10 billion in next ten years, a target that sounds too ambitious to be feasible.

Just before this latest decree for blockade of Pakistan trucks, a campaign on social media – though deleted later – accused Pakistan of transporting arms to Taliban in trucks. What type of connection are such campaigns trying to build? Are they not establishing by themselves that this is the very danger that stops Pakistan from allowing free flow of Indian trucks through its territory?

Ghani and his team need to realize that for enhancing Afghanistan’s exports, Pakistan’s role remains pivotal. Measures such as shifting of trade to costlier routes and ‘forced partnerships’ would bear fruits only in certain seasons. Afghan people know well what sort of an international trade regime is being imposed on them. They know that they are suffering – in terms of both availability and affordability – because of this trade game that is being played at the regional level, with the blessings of the extra-regional mentors, who want to force Afghanistan towards India, and unfortunately, through Iran.  Even more unfortunate is that Iran, who otherwise has strongly opposed designs on these regional players, is going long in this case.

Such tactics don’t survive for long.