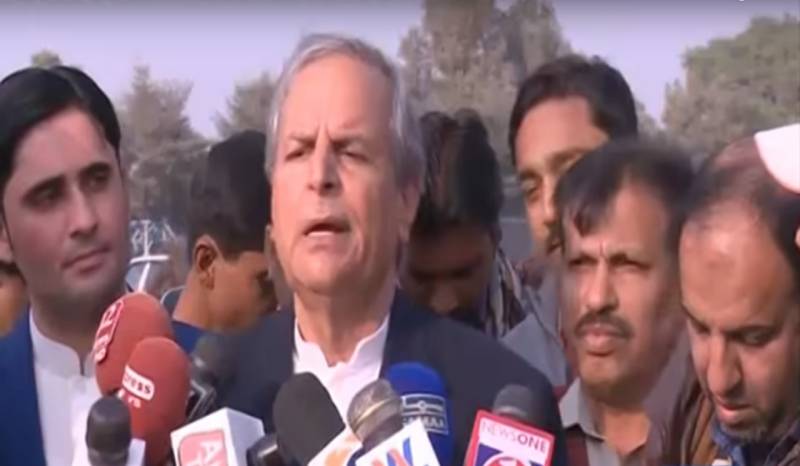 MULTAN - Senior politician and ex-PTI leader Javed Hashmi said that during the dharna movement in 2014, "Disgruntled elements in the army wanted to make Raheel Sharif unsuccessful at any cost, and through Imran Khan, they wanted to destroy the parliament. Imran Khan was frustrated because he didn't get votes."

Imran accused the veteran politician of lying. "What response can I give to Hashmi's jhoot plus?" he asked.

"When we asked [during the 2014 sit-in] 'Why hasn't the umpire raised his finger?', he [Imran] said we weren't able to deliver on the commitment we promised them, so how will it happen? All of this was being guided step-by-step by a written script," he alleged.

"Our script writers, whoever they were, wrote that Tahir-ul-Qadri would go to parliament and we [the PTI] would sit behind them. That was the main script... It was his [Imran's] second step to get everything done by the Supreme Court," he claimed.

"Imran said [former Chief Justice of Pakistan] Tasadduq Jillani would leave and then Nasir-ul-Mulk would come. He would [listen to us] and either dissolve the assemblies. And after that, there would be elections in 90 days. During that time, he said, the Supreme Court will take over and then we [the PTI] will win," Hashmi alleged.

"I said, Imran Khan, this is not how it happens. This sit-in will not be successful."

"I was asked how many seats we would get in the election. I said 40, and we got about 37," he said. "Now everyone's assessment was that we aren't winning seats. So if you're not winning, don't destroy the entire country because you're frustrated," Hashmi said, referring to the PTI chief.

"I resigned because the Supreme Court's holidays were cancelled... This seemed like a very big conspiracy to me," he said. "This seemed like the last item [on the script]. Because the generals had already told Imran Khan that Nawaz Sharif would not sign his resignation letter," Hashmi claimed.

"This story about Nawaz was told to Imran by a man of Gen Rashid Qureshi's... It was his second step to get everything done by the Supreme Court."

Hashmi also said he has always been against the strategy of the PTI's sit-ins. "It isn't the right strategy as it will only produce more struggle for the young political workers in your party," he said, adding that he had warned Imran that his party workers would struggle on the streets for five years without any outcome.

"Young people see things in black and white," he said. "I am more experienced than he is in politics. I know what I am saying."

Imran responded to Hashmi's allegations by implying the veteran politician had lost his senses and was lying.

"I think Javed Hashmi has reached the age where his mental state is not sound. What response can I give his madness, his jhoot plus?" he asked.

Hashmi, responding to Imran Khan's jibe at his age, said, "Imran Khan is only a year and a half younger than I am... A board should examine his mental state and mine too. Then it will be clear who is sharper."

"If a mental health institution [tested us] and released a report, then the country would be free of Imran Khan... They will be surprised to learn what a liar he is."

"I think there should be a commission. There has been such a big fraud with the people. I guarantee you, he will not dare to sit and say otherwise in front of me."