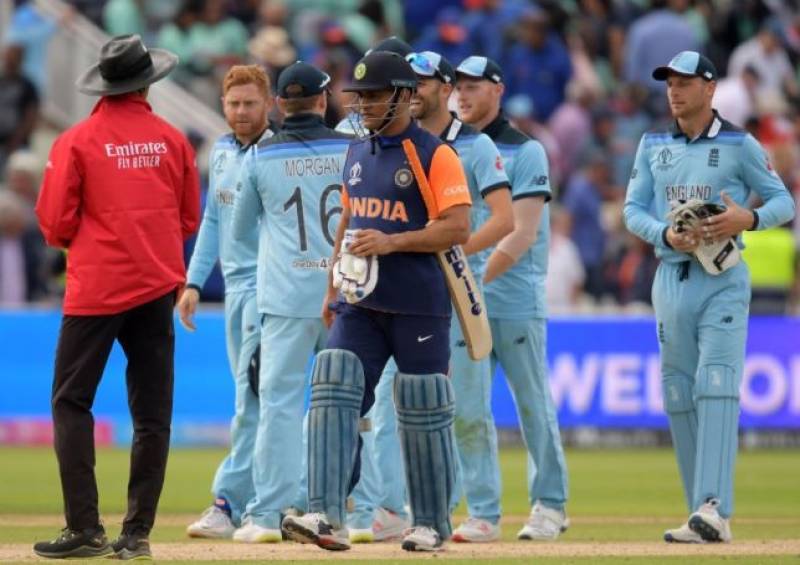 LONDON – MS Dhoni has been slammed by former players after his low-spirited innings in India’s World Cup 2019 defeat to England on Sunday.

The former Indian skipper finished unbeaten on 42 from 31 balls during 31-run defeat England at Edgbaston as India lost their unbeaten tag at this mega event.

When the 37-year-old came to the crease, the run-rate was at almost 11 but it quickly rose to 15 as he appeared content to pick up singles. Dhoni scored four boundaries later in his innings before hitting India’s only six in the penultimate over but it was not nearly enough as Virat Kohli’s side slipped to a defeat, reports Metro.

The result represents a significant blow to Pakistan’s hopes of progressing in the tournament, with England now may reach the semi-finals at their expense if they beat New Zealand on Wednesday.

Pakistan fans took to social media to vent their frustration at Dhoni and now a number of ex-players have criticised the veteran’s approach.

Former New Zealand captain Brendon McCullum told Sky Sports: “It was bizarre. These guys have finished games so many times before and from harder positions. They didn’t really play a shot towards the end. ‘Credit to England, they bowled well and held their nerve. But it was bizarre and an anti-climax. We all expected a tight finish but India’s big finale never came”.

Fellow ex-Kiwi star, Daniel Vettori, added to ESPNcricinfo: “The bowling and fielding was very good. England took the pace off and mixed it up, their game-plans were great. But I also thought Dhoni and Kedar Jadhav didn’t have the right intent. I expecting to see them clearing their front leg and trying to hit sixes every ball but they were just nurdling it around. They had to go all out to try and win the game. It didn’t matter if they lost at that point because it felt like they were going to lose anyway”.

Virat Kohli has defended MS Dhoni after the India legend received criticism for his performance in the World Cup defeat to England.

He said: “It’s up to the discussions with the two guys in there. MS was trying really hard to get the boundaries. It wasn’t easy because they were bowling really well. When the run-rate got to 14-15 it became tough. We will sit down and assess and try to improve in the next game.”

“No one likes to lose but you have to take it in your stride and understand that the opposition played better on the day. English side was more clinical in the executions of their plans. We have to accept that. The mood is the same – it’s a setback and we have to brush it aside and move forward”.