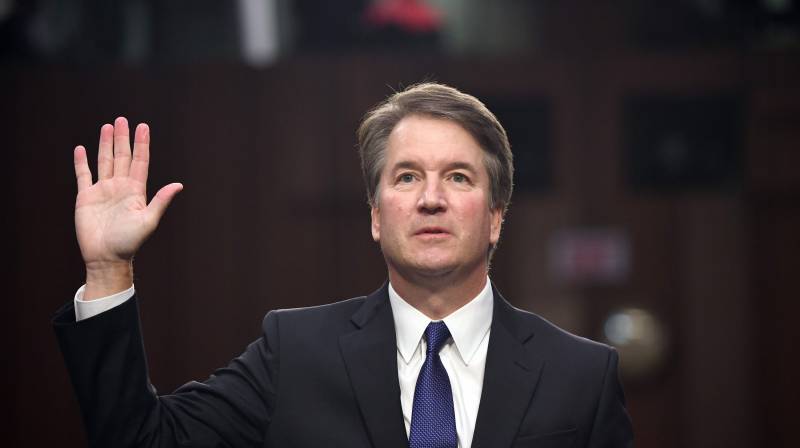 Please don’t be alarmed, or feel excited, by reading the title of this piece. It's not about our judges. Certainly not about any sitting judge. I am not that of a daredevil who would try to poke a judge: any judge, whether sitting, standing, walking or sleeping.

This piece is primarily about Mr. Brett M Kavanaugh, the famous nominee of POTUS to the US Supreme Court, who dominated the international media almost half of September. The piece in the passing, mentions the most famous CJP of this century, who indirectly was part of headlines last week, when reportedly his son in law was arrested by NAB.

As a tertiary treatment, it's about Indian judges who in the last few days have set India on a road to socio-sexual liberation. First, by declaring that the colonial ban on homosexuality was wrong; and, then striking out a law which penalized women for adultery (a piece on this one day!).

Practically speaking, no one can judge a judge – not even another judge, sitting or standing. However, we can attempt that theoretically and take pleasure – quite similar to the one which inebriates the scientists who predict the origins of the Universe.

Mr. Kavanaugh is accused that he did not act gentleman when he was in high school, and as a matter of fact, not a man yet! If the same yardstick, God forbid, is ever applied in Pakistan for the nominees of public offices – like judges, generals, and ministers – we may have to import these officials from other countries. Or, we may consider appointing women to these offices - as not many men will pass the test elsewhere either.

By the way, it is not a bad idea to aim for a woman Chief Justice, a woman COAS, and a woman President in Pakistan. After all, we have had a woman PM, and women Speakers of the National Assembly in the past, why not to these offices. At least, women are a safe bet, and not likely to be accused of assaulting their classmates or colleagues or subordinates. I mean, not yet!

In case Mr. Kavanaugh’s nomination is not approved, the US – for future safe passage - can follow our footsteps in appointing judges to their Supreme Court. For now, they can import one of our former chief judge who in his time was as famous – albeit for different reasons – as Mr. Trump; and, who once was set to be Pakistan’s president.

The Indian judges are lucky, or perhaps smart - though I believe no other country than Pakistan can have smart judges or generals, therefore, I would call them lucky.

They are lucky for they don’t become controversial even after giving controversial verdicts. Some people say, Indians judges know how to arrive at their own verdicts; and their decisions are written by them, and in their courtrooms.

I know, like you all friends do, this is just a farce. Such rumors are spread to misguide that judges in India are more competent and professional. That they don’t talk, their judgments do. Holy Crap. It's just to take the spotlight away from their being lucky. Pakistani judges must decode their luck-template and ameliorate. A verdict is a verdict whether written by a judge or not.

In Pakistan, ungrateful people make judges controversial even when their verdicts directly contribute to National Interest. Indians judges are no good when it comes to national interest. It seems the naïve Indians have left this important job to their politicians.

They will regret one day. Defining and defending national interest is too important a job to be left to politicians alone. Judges and generals should have the first say and last laugh.

Now, we come to the million-dollar question – who should screen and oversee the judges? Be it Pakistan or USA. In my view, which is the view of Pakistan’s exalted and superior judiciary too: screening and appointing judges is as important as defining and defending the national interest.

It cannot, and therefore must not be left to politicians.

As far Judge Kavanaugh is concerned, he should come to Pakistan and for his credentials, he will even qualify to be a PM – let alone a SC judge.