While the Devil is Away … 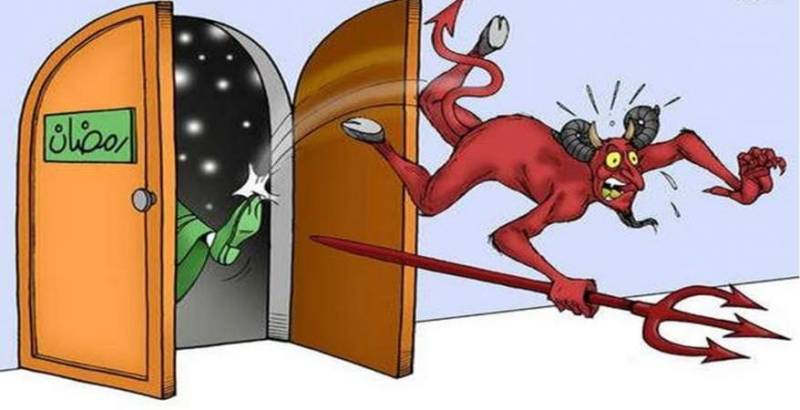 An amusing thing of the holy Ramzan is its most popular folklore that Mr. Devil, i.e., Shaitaan or Ablees gets confined. This piece will advise you of a few things to do while the devil is away!

Before I say more, a small but significant feeler: If you too have Urdu Medium roots like me, you must have felt a deeper sense of delightful vengeance (that we all experience) when we call Mr. Devil by its local name, Shaitaan, or formal, Ablees.

That shows the importance of mother tongue, at least in calling names, if not in evident better learning outcomes in a child’s early years at school.

My friends who delve in Punjabi, Sindhi, Pashto, Seraiki, Hindko and other native languages, when in love or when out of love by the other person’s choice, will bear that the delight we get in expressing our sentiments in native language surpasses all other visceral experiences.

Here, Urdu and Persian seem poorer because of their historical association with Royal Court, as you don’t find many and as effective pulverizing expressions in them because in the Court the subordinate speakers were under the burden of civility. Whereas, the kings did not resort to calling names for they could do a more killing thing, i.e., order a killing!

But when the men in courts came out to a do latter wit catharsis, I am sure they resorted to their respective native languages. In case they did not have a native language, i.e., they knew Persian or Urdu only, I infer they borrowed expressions from the natives of that time and place.

The above elaboration was not for nothing. The first thing on our list this Ramzan is to call Mr. Devil by its local names and experience ecstatic joy along with earning the customary sawaab (blessings) which religious preachers have promised us. And do it as much as we can, because, with the inauguration of one section of the CPEC, it is evident that Chinese physical arrival and socio-cultural influences are imminent and real. So, in a few years, there could be government notification to call Mr. Devil by its Chinese name 魔鬼 (pronounced as Móguǐ or mo-go-ee).

The phonetics and early feedback of its experimental use suggest the Punjabis and Seraikis will pick and perfect the new name quicker than others (unlike Sindhis and Pashtoons), and thus are set to reap early and more benefits from CPEC, whether Seraiki province is in place or not.

This Ramzan, we heard the devil was not properly looked after in prison and was not allowed the privilege of watching Geo and Bol TV (he was only allowed PTV and QTV). So, he threatened a jail-break. The authorities not wanting another scandal in the holy month, and just a few weeks before the elections, resorted to banning his heir apparent Dr. Aamir Liaqat.

Devil is not happy with it, and we hear has threatened a hunger strike, which he would call fasting. Now that can be a real crisis, more serious than Nawaz Sharif’s recent traitor acts.

So the next task on our list can be not to watch any shows which Mr. Devil gets envious of us, and actually resorts to fasting.

At my end, while the devil is away, I will write on topics which devil can stop me from.

There have been certain acts in the last 10 days which Mr. Devil reportedly feels jealous to have missed; one being the release of Spy Chronicles, and the other, calls to jail Nawaz Sharif.

I hope the three-time PM is not put in the same cell as Mr. Devil. Because if that happens, the former can learn devilish ropes from his inmate. The latter will be out in mid-June, and the July elections could very well go to the devil.

May God save us in the holy month from ourselves, as many of us are making sure the devil is not missing in action despite being in confinement.

Mr. Devil, for a change, is taking it easy I hear.