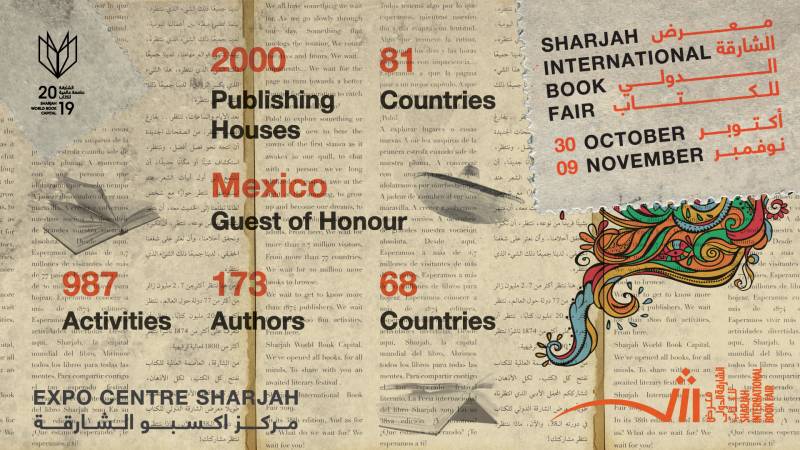 SHARJAH - It’s a dream come true for the UAE’s book lovers and cultural enthusiasts as, in less than a month’s time, they will come face to face with the literary world’s greatest. Steve Harvey, American comedian, TV show host and author; Orhan Pamuk the first Turkish novelist to win the 2006 Nobel Prize for Literature; and Indian poet, lyricist and film director, Gulzar who took the Academy Award for the Best Original Song “Jai Ho” in 2008, will be among the international cultural personalities who will be flying in to attend the 38th annual edition of the Sharjah International Book Fair (SIBF 2019).

A comprehensive overview of what the 2019 edition of SIBF will entail has been revealed at a press event today (Tuesday), organised at the Sharjah Book Authority (SBA) headquarters in Sharjah.

To be held under the patronage of His Highness Sheikh Dr. Sultan bin Muhammad Al Qasimi, Supreme Council Member and Ruler of Sharjah, the 11-day cultural extravaganza organised by SBA will be held at the Sharjah Expo Centre from Oct 30 – Nov 9. The Republic of Mexico will be celebrated as guest of honour country and Steve Harvey is the fair’s principal guest of honour.

He will be joined by 173 leading authors from 68 countries and 90 cultural figures from 28 nations, including the likes of Mark Manson, Vikram Seth, Anita Nair, Inaam Kachachi, Mohammed Al Sakran, Bothayna Al Essa and Elisabetta Dami.

Together, they will lead 987 activities distributed among scientific, knowledge and literary themes, including 350 cultural events to be enjoyed by book and culture enthusiasts across age groups.

SIBF 2019 will be carrying the Sharjah World Book Capital 2019 theme ‘Open Books. Open Minds.’ Emphasising the importance of books in shaping creative and tolerant generations, HE Ahmed bin Rakkad Al Ameri, who made a detailed presentation of SIBF 2019 cultural programme said:  “SIBF has assumed the World Book Capital title because it was the truest reflection of the message the fair wants to convey to its visitors and to the world. His Highness Sheikh Dr Sultan bin Muhammad Al Qasimi, put the book as the cornerstone of the emirate’s cultural and civilisational project, and today over 45 years later, one of the outcomes is SIBF – the world’s third largest event of its kind”.

He added: “The prestigious UNESCO title is a recognition of a unified vision and strong collaboration between cultural entities in Sharjah who believe that books are the basis of knowledge and humankind’s true advancement.”

Offering this year’s country-wise publisher breakup, Al Ameri noted, “198 Emirati publishers are at SIBF this year. When we started the fair in 1982, there wasn’t a single one. The total number of participating publishers is a big achievement and is a fruition of the efforts of the Sharjah Ruler in promoting Sharjah as the home of the book”.

Egypt is coming in with 183 publishers, over 100 from India, 91 from Lebanon, and Syria will be represented by 64 publishing houses.

“Children will have much to look forward to in this year’s edition as we have lined up 409 activities to be brought in from 14 countries across the world, just for them. They will also enjoy 88 theatrical performances from 8 Arab and international countries including the popular Kuwaiti play, Wakanda. Additionally, our Comic Book Corner will host 66 activities led by 5 guests from four countries, including Kuwait’s Ahmed Al Rifai and the UAE’s Ali Kashwani. Eleven international movies adapted from comic books, including major box office hits, Black Panther, Green Hornet, Spiderman and Captain America will be screened here”, Al Ameri continued.

“We wanted to bring new features and new dimensions that will further enrich the overall output of the event”, Al Ameri remarked sharing details of two new features, namely a Diversity Hub and a Design Thinking Platform.

The Diversity Hub will serve as an open space to discuss a range of trending topics in the world. The discussions will highlight the diversity and differences from culture to culture, as well as analyse their effects on the local community. The Design Thinking Platform, on the other hand, will push platform attendees to ‘think out of the box’, formulate creative ideas and transform ordinary ones through a mixed theoretical-practical approach.

A total of 20 workshops led by 12 guests, including notable names like Notable guests Moataz Mashal, poet Mustafa Ibrahim, Durjoy Datta, are scheduled to be held over the course of the book fair. Six social media influencers will be leading discussions and activities tackling important cultural, media-related and social topics. They will be sharing excellent tips on how to leverage social media platforms to promote reading, culture and constructive dialogue.

Meanwhile, food lovers are in for new culinary explorations with 15 Arab and international chefs from 9 countries, including Syrian Mohammad Orfali, Indian Judy Santos and Vikas Khanna, who will be staging 48 live culinary activities.

Guest of Honour – Republic of Mexico

“By turning the spotlight to Mexico’s long and vibrant cultural history this year, we want our visitors from the UAE and beyond to closely experience their literature, poetry and intellectual achievements. At their pavilion, works of renowned Spanish language authors, an array of cultural activities including panel discussions, launch of publishers’ initiatives, and folk shows will be celebrated”, said Al Ameri welcoming the Mexican Ambassador on stage.

HE Franciska Mendez Escobar thanked Sharjah Book Authority and Sharjah, calling the designation of Mexico as Guest of Honour Country as a cultural distinction, and a decisive step towards strengthening bilateral relations between the two.

“The Mexican National Chamber of the editors industry will bring to this remarkable event several authors who certainly will contribute to the success of this important book fair. Reading creates a bridge of understanding between peoples and nations. This is why I congratulate our country for the announcement made this July regarding Sharjah’s participation as the Guest of Honour at the 34th edition of FIL – the International Book Fair in Guadalajara, in 2020, where we will continue deepening our cultural exchange.”

Highlighting a host of programmes and on-ground coverage, HE Mohammed Khalaf said that the Sharjah Broadcasting Authority will be dedicating all their channels and programmes to promote the fair’s activities, will advertise its events and the leading books that will be showcased.

“Our channels in Kalba and Dhaid will have a live telecast from the book fair for one hour, every day. Pulse 95 will be running radio shows from the book fair venue. Our coverage will be in both Arabic and English on TV and radio. We have 40 promotional books for children and families before, during and after the event. Social media has its own dedicated programme too”.

Khalaf also emphasised Sharjah Broadcasting Authority’s belief that the message of literature is everyone’s right. “His Highness Sheikh Dr. Sultan bin Muhammad Al Qasimi chose the book as the prime tool for the emirate’s cultural renaissance. SIBF is one of the three largest book events in the world, and this year Sharjah hosts its 38th edition as the World Book Capital 2019. We will dedicate our best resources to SIBF 2019, and do our part in furthering Sharjah’s and the UAE’s vision for human-centric development,” he added.

HE Abdulaziz Taryam said Etisalat was delighted to return with their support to the region’s leading event for books and culture. He said: “We are proud to be the sponsor of this event, which we consider a significant national and international event. A city of light, knowledge and culture, Sharjah is a leading ambassador of the UAE to the world”.

“The Etisalat Award for Children’s Literature, which is in its 11th edition this year, puts us on the road to progress and is part of our social responsibility towards the people of the UAE. Etisalat will continue this same approach to support all initiatives that promote UAE’s development as a knowledge economy,” he added.

The annual Publishers Conference will be hosted on October 27–29, which will welcome over 566 publishing professionals from 18 countries across the world to meet in Sharjah.

Members of the American Library Association (ALA) will again be meeting their counterparts from the Arab world in the 6th annual edition of the Sharjah International Book Fair/American Library Association (SIBF/ALA) Library Conference, on November 6–8. This is ALA’s most ambitious international professional development collaboration to date, with over 400 professionals scheduled to participate.