US senator charged with corruption 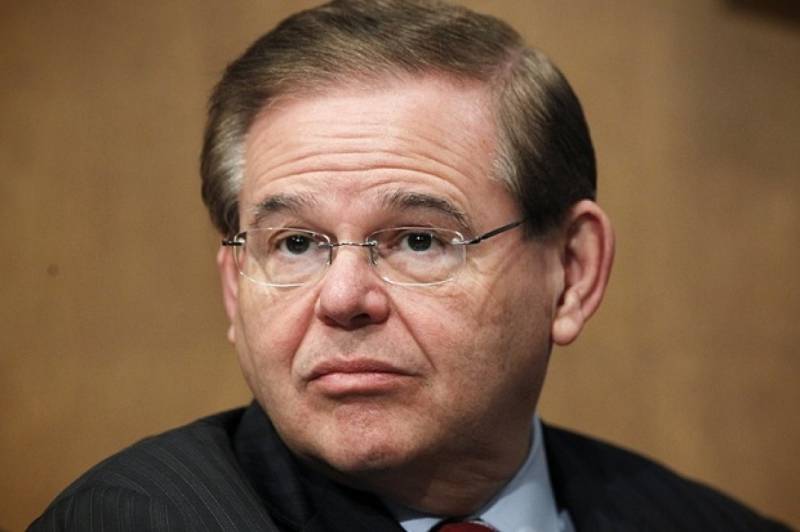 TRENTON (Web Desk) - A top US senator, Democrat Bob Menendez, has been charged with 14 counts of corruption.

The New Jersey politician is accused of using his influence to illegally benefit a Florida eye doctor, who he admits is a long-time friend.

At a press conference, he said he was "outraged" by the charges and dismissed the allegations as false.

The 14 charges include conspiracy and making false statements, as well as eight counts of bribery.

Menendez has resigned as the top Democrat on the Foreign Relations Committee and vowed he "would not be silenced" as he fights the allegations.

"I am outraged that prosecutors at the Justice Department were tricked into starting this investigation three years ago with false allegations by those who have a political motive to silence me," Menendez told a cheering crowd of supporters in Newark.

New Jersey's largest newspaper, the Star and Ledger, has called on him to resign his Senate seat.

In recent years, the senator has been an outspoken critic of President Barack Obama's policies relating to Iran and Cuba.

He is considered one of the most influential Hispanic American lawmakers in Congress, and is the lead author of legislation that would tighten sanctions imposed against Iran.

The investigation first came to light in 2013, when federal authorities raided the office of Dr Salomon Melgan - who was also charged.

Their investigation focused on whether Menendez used his office to advocate in favour of Dr Melgan including by intervening in a Medicare billing dispute.

Dr Melgan attracted more attention last year when government data revealed that he had received more money from Medicare reimbursements in 2012 than any other doctor in the US.

He donated large sums of money to Menendez's re-election campaign.

"We celebrated holidays together," he once told journalists. "We have been there for family weddings and sad times like funerals and have given each other birthday, holiday and wedding presents, just as friends do."

Menendez has admitted to taking multiple trips to the Dominican Republic on the doctor's private jet and initially failed to properly pay for the trips. In 2013, he reimbursed Dr Melgan for two of the flights.

Later, his office admitted to another flight on the jet - from Florida to New Jersey in 2011 - and said that the senator had repaid Dr Melgan for it.

Menendez, 61, has served in the Senate since 2006, and was in the House of Representatives for more than a decade before that.