Zalmay Khalilzad stresses intra-Afghan dialogue in fresh round of talks 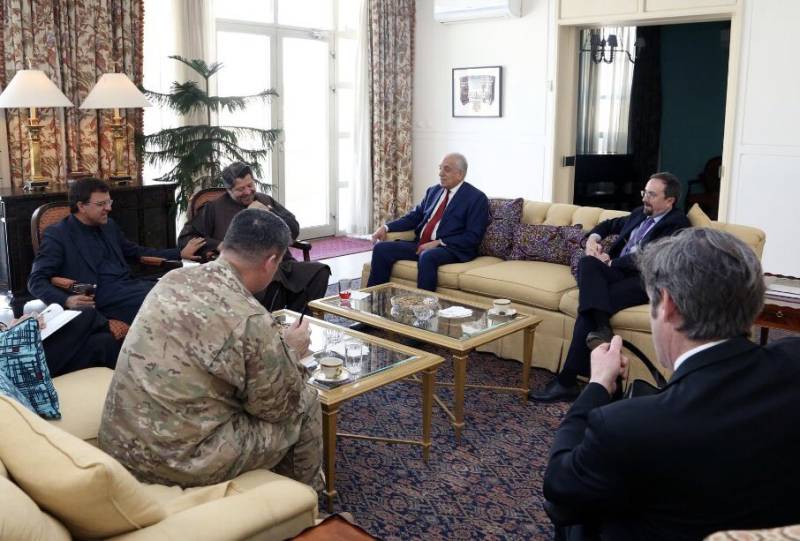 The participants of the high-profile meeting discussed the urgency of progress on intra-Afghan dialogue on Monday.

Good to speak today with @HekmatKarzai & @DrOmarZakhilwal about the #AfghanPeaceProcess. We agree that intra-Afghan dialogue should be comprehensive and inclusive with representatives from the #Afghan government, women, young people, and civil society. pic.twitter.com/X29wkERkWs

"We agree that intra-Afghan dialogue should be comprehensive and inclusive with representatives from the #Afghan government, women, young people, and civil society," the envoy tweeted after the meeting.

According to the US Department of State, Khalilzad's fresh visit is aimed at consulting with the Afghan government and other stakeholders about the status of US talks with the Taliban that are moving forward at a snail's pace.

Other objectives of his visit include encouraging efforts to form an inclusive negotiating team and discussing next steps in intra-Afghan discussions and negotiations.

KABUL - US and Afghan Taliban negotiators concluded their latest round of marathon peace talks which lasted for 16 days ...

In this trip, Khalilzad is travelling to Afghanistan, the United Kingdom, Belgium, Uzbekistan, Jordan and Qatar from March 25 to April 10. The envoy would also land in Pakistan to hold meetings with senior government officials as Pakistan has pledged to extend full support to the negotiations that could put an end to the long-standing war.

Khalilzad wrapped up his last tour in the second week of March and confirmed that no agreement was made during what he described the marathon round of talks.

The representative also put forth four contentious issues to be resolved between the opposing sides.

(2/4) Peace requires agreement on four issues: counter-terrorism assurances, troop withdrawal, intra-Afghan dialogue, and a comprehensive ceasefire. In January talks, we "agreed in principle" on these four elements. We're now "agreed in draft" on the first two.

The representative announced that the next step would be discussions in Washington, adding that “there is no final agreement until everything is agreed.”

U.S. President Donald Trump wants to pull out roughly 14,000 American troops from Afghanistan and has tasked U.S. peace envoy Zalmay Khalilzad to strike a deal with the militants while enlisting the help of Islamabad as well which has repeatedly assured that it would play the necessary role in this regard.