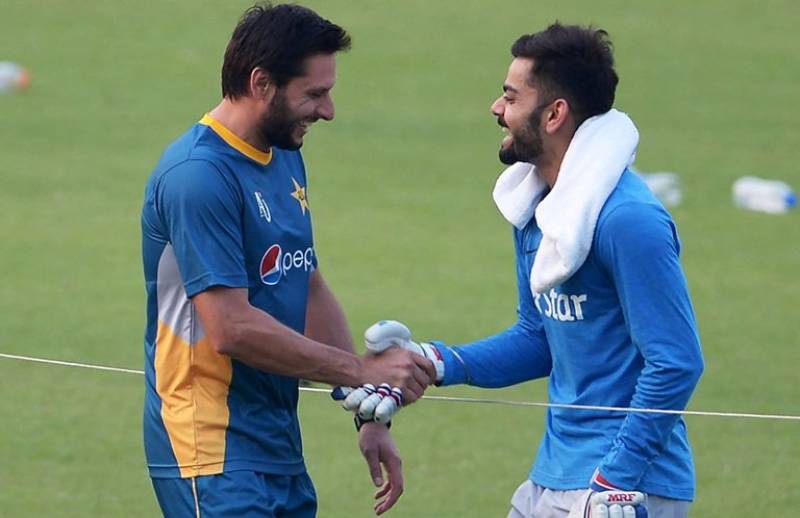 Afridi, who got involved in philanthropic activities at a time when his cricketing career was reaching its end, took to Twitter on Tuesday to thank the flamboyant Indian player for his gesture.

Thank you @imVkohli for your kind gesture in support of @SAFoundationN. Friends & supporters like you ensure #HopeNotOut for everyone pic.twitter.com/T6z7F2OYLb

Within the same hour, Kohli replied and wished Afridi the best for his foundation.

You're most welcome Shahid Bhai.. Wishing you and the @SAFoundationN all the luck for the upcoming events. ☺️ #HopeNotOut https://t.co/Rv1NNPJGC5

The star Pakistani all rounder while talking to Geo News, said that Kohli’s gesture was a great sign for humanity and people wanted to watch him play cricket in Pakistan.

“We must encourage good things, regardless of who is doing it,” said Afridi.

“Kohli is a legend and he has always been very supportive and I am very thankful to him for his support,” he added.

The 37-year-old Pakistani athlete confirmed that Kohli’s bat will be auctioned for his Thar hospital project and the auction will take place in Newcastle, England.

It is relevant to mention that Kohli, who gifted a signed T-Shirt to Afridi on his retirement was also auctioned on Monday by the Shahid Afridi Foundation.

According to reports, the winning bid for the jersey was 4,300 euros.

The jersey also carried this special message from Kohli: “Best wishes, Shahid Bhai. Always a pleasure playing against you.”