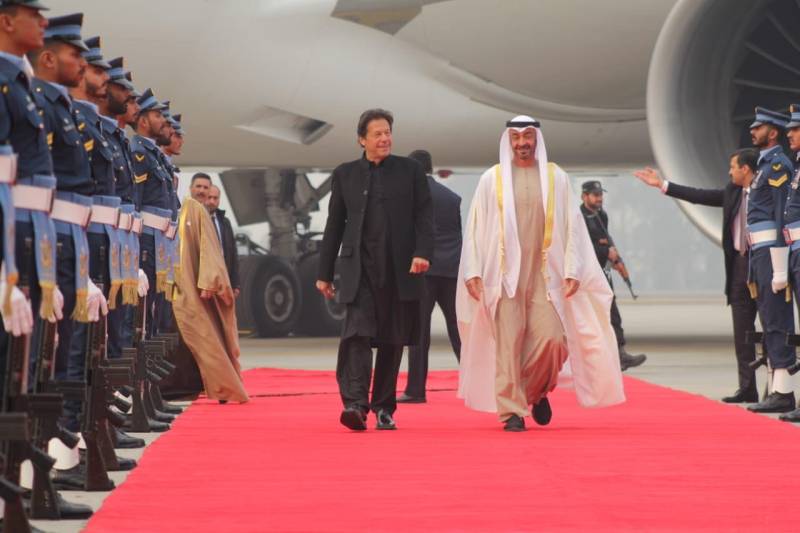 Prime Minister Imran Khan received him at the Noor Khan airbase where he had arrived through a special plane.

According to Foreign Office Spokesperson, Sheikh Khalifa bin Zayed Al-Nahyan is second President of UAE and 16th ruler of Abu Dhabi. During the visit, the crown prince will hold a meeting with Prime Minister Imran Khan "to discuss the ways to enhance bilateral relations between the two countries.”

Frequent exchange of high-level visits between Pakistan and the UAE is reflective of the importance that the two countries attach to their fraternal ties.

The visit also illustrates the strength and substance of the Pakistan-UAE special relationship.

The UAE is Pakistan’s largest trading partner in the Middle East and a major source of investments and is also among Pakistan’s prime development partners in education, health and energy sectors.

UAE hosts more than 1.6 million expatriate Pakistani community, which contributes remittances of around $4.5 billion annually to the GDP.

The visit of Crown Prince will contribute to further enhancement of multi-faceted collaboration between Pakistan and the UAE.

The UAE crown prince's visit, which is part of growing exchanges between Pakistan and Arab countries, will take place less than a week after Emirati Minister for Tolerance Sheikh Nahyan bin Maba­rak Al-Nahyan met the premier and President Arif Alvi to discuss possibilities of expanding bilateral ties.

The UAE crown prince had last visited Pakistan on January 6 in 2019, just weeks after his country offered $3 billion to support Pakistan's battered economy.