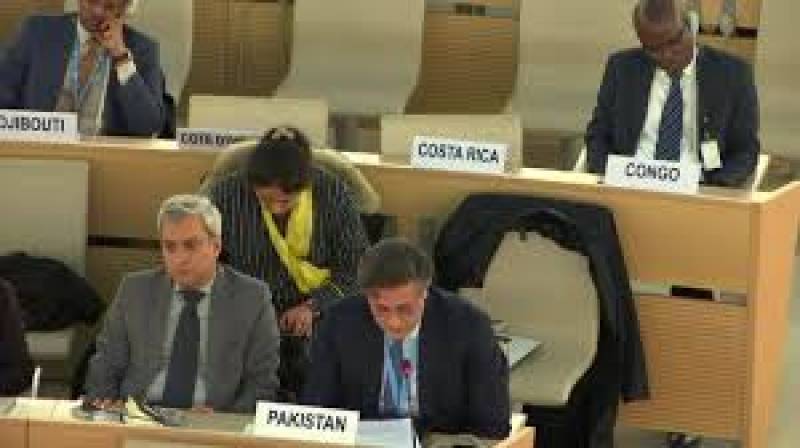 While participating at 44th Session of Human Rights Council, Pakistan's permanent representative to the UN in Geneva, Khalil Hashmi said that the primary goal behind the unilateral actions of India is to change the demographic composition of the occupied territory.

The representative said that the country is imposing its signature imperialist policies by granting domicile certificates to non-residents in thousands.

Khalil Hashmi said this 21st century version of muzzling fundamental rights, flagrant disregard of democratic principles and non-compliance of international law are being carried out by nearly one million military and paramilitary Indian forces.

He said the UN High Commissioner has been alerting the Council on the dire human rights situation in Indian Occupied Jammu and Kashmir. Since the last Kashmir report by OHCHR in July last year, the scale and gravity of human rights abuses in Occupied Kashmir has increased significantly. This crisis situation has been unleashed by India's illegal actions of 05 August last year.

The Representative said these abuses and atrocities include arbitrary arrests, detention and imprisonment of political activists and human rights. The Kashmir Bar Association reports that over 600 habeas corpus petitions filed before the High Court since last August remain pending. During this period, nearly 13000 Kashmiris remain imprisoned in various jails without recourse to justice, the Radio Pakistan reported.

Khalil Hashmi said in using excessive force, India has up-scaled weapons' calibre, targeting civilian population and their houses in the so called cordon and search operations. At least 30 Kashmiri youth have been martyred in the last two weeks by Indian military, acting as Judge, Jury and Executioner.

The Representative added that India has promulgated new "Domicile Law" in Kashmir, designed to settle Indian nationals in Jammu and Kashmir and convert Kashmiris into a minority in their homeland.

Khalil Hashmi urged the council and its Special Procedure Mandate Holders should not remain a silent bystander to these human rights crimes in Occupied Kashmir.

He also emphasized upon the High Commissioner to continue remote monitoring of the human rights crisis in Occupied Kashmir and present an updated report in time for the 45th session in September this year.