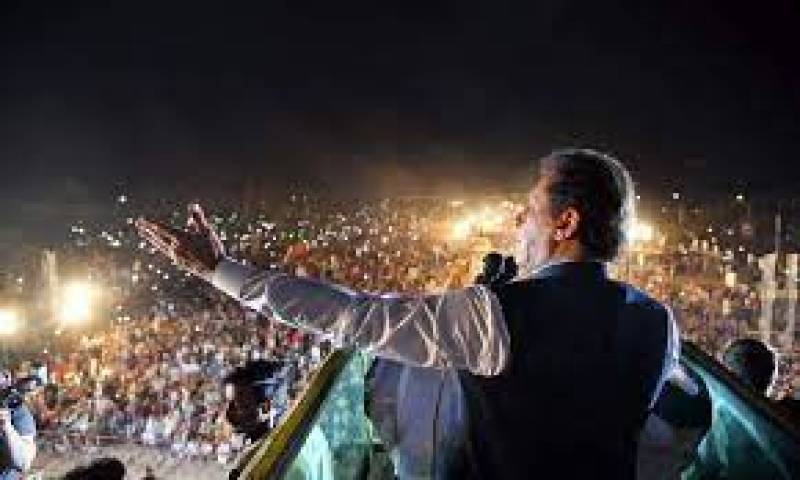 ISLAMABAD – Ousted prime minister Imran Khan on Saturday alerted his party workers and supporters about possible rigging during the upcoming by-polls in Punjab, citing the reason that "the umpires" were on the government's side.

Addressing a public gathering at Islamabad's Parade Ground against inflation, political destabilisation, excessive load-shedding and continued hikes in fuel prices, Khan said: "We have 20 by-elections [coming up] in Punjab. The only way they can win is through rigging. The people are against them, [but] the umpires are with them."

"We have to defeat these thieves despite umpires' support to them," he said.

"No matter what tactic they use ... whether they rig the election or use the police, the nation will never accept them," Imran said referring to the PDM coalition government led Prime Minister Shehbaz Sharif. He often dubs the incumbent government as "imported" and says it was imposed on the country by the US after ousting his own government through a "conspiracy".

Opening his speech, Khan explained why he chose to end his long march on May 26.

"I knew there would be anarchy that evening and people would have come face to face with the police and the Rangers," he said. "[This] nation, the police, the Rangers [all ] are mine. I don't want to spread anarchy within my nation. I had set out just for one purpose: imported government unacceptable.

"I had set out for one reason, and that was to [show] all the institutions where nation is standing and what it wants and that it will never accept these thieves.

"I invited you all today because I wanted to prove that if they hadn't used force on May 25, then there would have been a sea of people in Islamabad and it would have said one thing: imported government unacceptable."

Addressing his political rivals, he said he knew that they wanted him to fight the army and the judiciary but "listen closely, our life and death is in Pakistan".

Earlier, Khan took to Twitter to woo the masses to arrive at Parade Ground for the power show against the coalition government.

In a related development, PTI leaders say the Shehbaz Sharif-led administration is disrupting screening arrangements in the port city of Karachi.

A day earlier, the Imran Khan-led PTI was allowed to hold a rally in the federal capital. PTI leader Ali Nawaz Awan signed a code of conduct before Islamabad’s deputy commissioner, taking full responsibility for any unpleasant incident.

The PTI agreed that the power show will not disturb or disrupt the fundamental rights of citizens such as the right to freedom of movement, trade and business and education.

It also agreed that the gathering shall end at 12 midnight, stating that it will be the organiser’s duty to ensure the dispersal after the event ends.