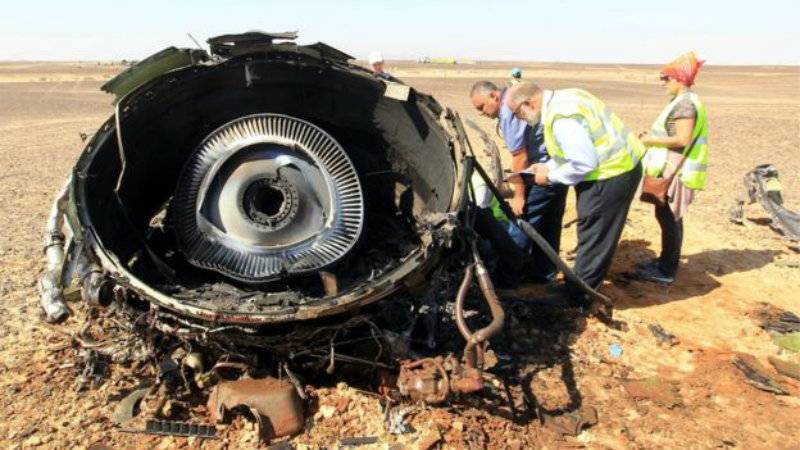 A senior airline official said: "The only reasonable explanation is that it was [due to] external influence."

An investigation by aviation experts using data from the aircraft's "black boxes" has yet to give its conclusions, the Russia Today reported.

A Kremlin spokesman has warned against speculation as to the possible causes of the crash. "We cannot exclude any version. The investigation is only beginning. We do not know yet what its main focus will be," he told the BBC.

At a news conference in Moscow, the deputy director of the airline, which was later renamed Metrojet, ruled out a technical fault and pilot error.

"The only [explanation] for the plane to have been destroyed in mid-air can be specific impact, purely mechanical, physical influence on the aircraft," Alexander Smirnov said.

"There is no such combination of failures of systems which could have led to the plane disintegrating in the air," he added.

Another airline official acknowledged that there had been previous damage to the plane's tail in 2001 during take-off. But he said that the damage had been repaired, and was not thought to be a factor in the crash.

The Airbus 321 lost speed and started descending rapidly, and the crew made no attempt to get in contact and report about the situation on board, Mr Smirnov added.

The bodies of 144 of those killed in the crash have been flown back to the Russian city of St Petersburg, where the plane had been headed from the Egyptian resort of Sharm el-Sheikh.

A second flight with more bodies is expected to arrive in St Petersburg on Monday evening.

The plane was carrying 217 passengers, including 25 children, and seven crew members - mostly Russians.