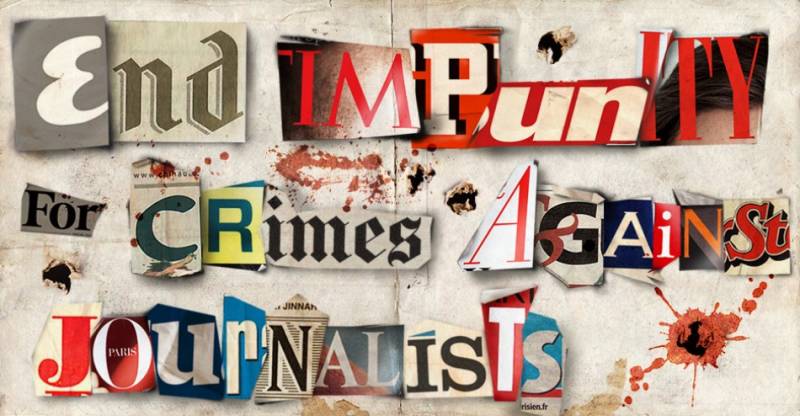 When we think about the most dangerous jobs in the world, we may think of military men, firefighters, astronauts, bodyguards but, according to an alert by UN, journalism (reporting) is actually one of the most dangerous professions.

When journalists are reporting organised crimes, exposing the corruption by powerful, reporting transgressions committed by political or extremist groups, they are risking their lives while performing their duty.

Unfortunately, in this profession, the stories covered may result in kidnapping, assault and even death of journalists and their staff.

Nowadays, journalism is more dangerous than ever.

To acknowledge the dangers journalists encounter, in their line of duty, at its 68th session in 2013, UN proclaimed 2 November as the 'International Day to End Impunity for Crimes against Journalists'. The resolution passed by UN urged the Member States to implement definite measures countering the present culture of impunity. The date was chosen in commemoration of the assassination of two French journalists on 2 November 2013.

Despite the efforts of the UN, the trend of journalist killings is on rising. In the past eleven years, approximately 930 journalists have been killed for bringing information to the public. On average, this is one death every four days. Impunity prevails in journalist killings thus, nine out of ten killers go unpunished, inviting more violence against journalists.

Pakistan is among the most dangerous countries in the world when it comes to the safety of journalists. According to the World Press Freedom Index of Reporters Without Borders, Pakistan ranks 139 out of 180 countries.

Today, on the International Day to End Impunity for Crimes against Journalists, media activists around the world ...

MMFD took to Twitter to raise a voice against impunity and created a twitter storm. Journalists from all over the Pakistan used #endimpunity and #noimpunity to express their concerns on the condition of journalists safety in Pakistan.

Happy to report #EndImpunity is one of top trends in Pakistan. Shout out to @mmfd_Pak team & twitteratis for pushing it through #JournoSafe pic.twitter.com/HqrhKXYyij

"Why would people choose the journalism profession anymore given the safety issues we face?", asks a journalist

"Why would people choose the journalism profession anymore given the safety issues we face?" One journalist laments @ KHI Press Club seminar

Statistics on journalist killings in Pakistan were shared:

Total of 120 journos that have died in Pakistan, 30% were in Sindh alone. Highest of all. @BBhuttoZardari @AseefaBZ #JournoSafe #EndImpunity https://t.co/s4vSQ4CGKl

Renowned journalist Wassatullah Khan shed some light on the necessity of ending impunity:

Impunity in crimes against journalists is important for citizens in general - tells @WusatUllahKhan #EndImpunity pic.twitter.com/2G41Ty75wF

Waqas Naeem, a journalist turned trainer, shared the story of a sister striving to get justice for his brother, who was killed investigating counterfeit medicine firms:

The sister of a Karachi journalist killed says 4 JITs formed to investigate the murder have led to no result, no justice #shame #EndImpunity

The fight against impunity for crimes against journalists in Pakistan is a long one. The presence of several mild authoritarianism, extremist groups, religious intolerance and conflict zones make journalism a dangerous profession. But this twitter storm to end impunity may be considered as the first drop of rain!