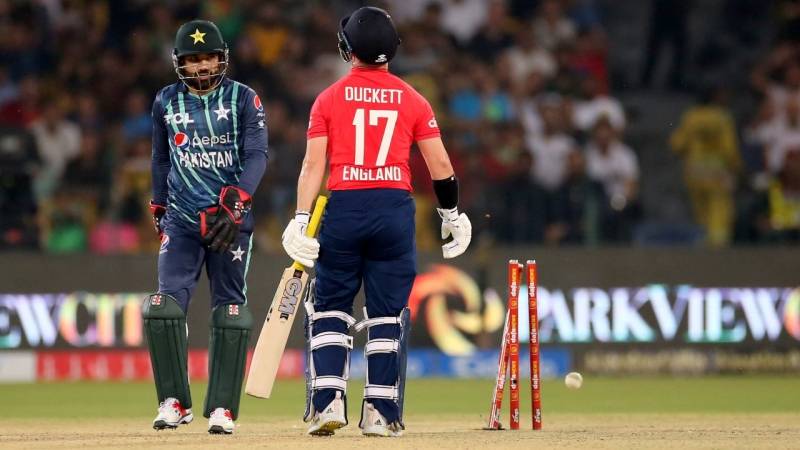 LAHORE – England beat Pakistan by 67 runs in the seventh and the last game of the T20I series at Lahore's Gaddafi Stadium on Sunday evening.

As Pakistan won the toss and invited England to bat first, they set a 210-run target for Pakistan to win.

The historic T20 international series between Pakistan and England is ending today with a high-octane series-decider as the two sides meet in a winner-takes-all tussle in the country’s cultural capital on Sunday (today) at 07:30 pm.

Men in Green and visitors are locked at 3-3 after six of the 7-match series with Phil Salt's blasting innings powering England to an eight-wicket victory on Friday.

In the last game, England batters thrashed the host's bowling side with only spinner Shadab Khan taking 2-34.

Earlier, Pakistan’s middle-order batter Haider Ali, who was earlier admitted to a hospital due to a viral illness, has been discharged.

England white-ball captain Jos Buttler appears unlikely to play despite his rehabilitation from a calf injury and Moeen Ali will continue as skipper in his absence, reports suggest.

As England visited Pakistan for the first time in 17 years, full houses in stadiums greeted the teams at all six games, and they got top-notch security.

Meanwhile, conditions in Lahore are expected to be humid and the final game will be played on a used pitch at Gaddafi Stadium.

LAHORE – Pakistan batsman Haider Ali was admitted to hospital after he fell ill during the sixth match against ...

LAHORE – England beat Pakistan by eight wickets in the sixth match of the T20I series at Lahore's Gaddafi Stadium ...